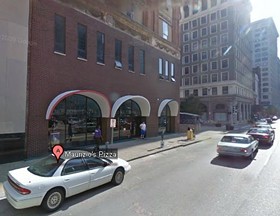 After a two-week trial, a city jury decided late last Friday evening that HBD Contracting Inc., the contractor of downtown developer Craig Heller, was at fault for damaging the Maurizio's Pizza building at Olive and 11th streets back in 2003 -- the year the company built an underground parking garage next door for the Louderman Lofts.

But just how much at fault is a more complicated question: The jury returned two different verdicts, with varying degrees of liability.

Backstory: In May 2003, HBD dug the hole for the Louderman parking garage at the behest of LoftWorks, Heller's development company.

Immediately, the owner of the pizzeria and the building itself, Steve Scaglione, noticed a huge crack running all the way up his structure, a five-story brick affair now almost 130 years old. The building had shifted so much, in fact, that the elevator could no longer climb the shaft to the top floor, and blue sky was visible through certain spots in the wall.

This threw a wrench in Scaglione's plan to convert the upper floors into lofts.

Scaglione sued HBD, framing the battle as a big-shot developer/City Hall favorite vs. the little guy (see our coverage at the time).

Eight years later, the matter finally went to trial, which both Heller and Scaglione personally attended. Scaglione was asking for $2.2 million.

According to a juror who wished to remain anonymous, the jury decided on Friday night that on the count of negligence, HBD was 100 percent at fault and should pay $1.3 million.

However, on the count of "per se negligence," the jury found the contractor only 60 percent at fault, with Scaglione himself bearing some of the blame.

HBD's attorney, Larry Grabel, tells Daily RFT he'll be trying to dissuade the Court at a hearing tomorrow from signing off on two verdicts that are "incompatible."

But Jim Martin, Scaglione's attorney, says his "theories of recovery were clearly alternate," and that they'll be dropping the count that resulted in only partial liability tomorrow.

"Steve seems happy with the verdict," Martin says of his client, who still operates Maurizio's Pizza. The businessman has already spent about $25,000 to brace and shore up his building, Martin says; to stabilize it back to its 2003 state will cost an additional $1 million.

Martin says Scaglione would like to do something with the building's upper floors, "but he recognizes the market for condos has gone to hell. He's lost that opportunity."