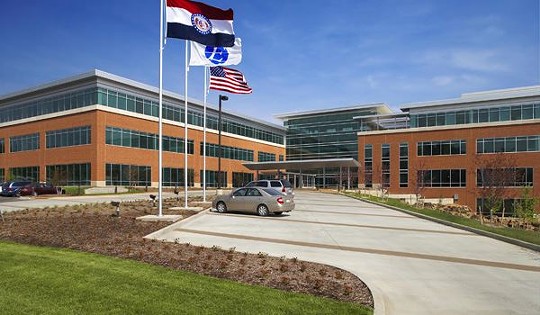 The pharmaceutical management company Express Scripts isn't just the largest St. Louis company on this year's Fortune 500 list -- it's actually made the magazine's list of fastest growing companies across the nation.

With 81.8 percent revenue growth in 2010 compared to the year before, the company leapfrogged 41 places up this year's list, which appears in the magazine's May 23 issue. It's now the 55th largest company in the nation, and it's breathing down the neck of No. 54 (which, for the record, is Goldman Sachs).

Fortune reports that Express Scripts' revenue totaled $44 billion in 2010. It also included the company in its list of companies that provide "the most bang for the buck" -- ranking it thirteenth in terms of revenue for every dollar worth of assets.

That growth appears mostly due to Express Scripts' completion of its acquisition of NetRx in December 2009. Express Scripts acquired the company for $4.675 billion.

But it doesn't hurt that many other companies in the Fortune 100 actually decreased revenue in 2010. Express Scripts was able to pass companies such as Sears (which reported 1.6 percent less revenue last year), Safeway (which had only minimal growth) and FedEx (where revenue declined).

What's the largest corporation in America? Wal-Mart, duh! All three of the top places on Fortune's list have stayed the same since last year -- they're held by Wal-Mart, Exxon Mobil and Chevron. Guess we'll have to say how badly those latter two companies are affected if Congress keeps tightening the screws...