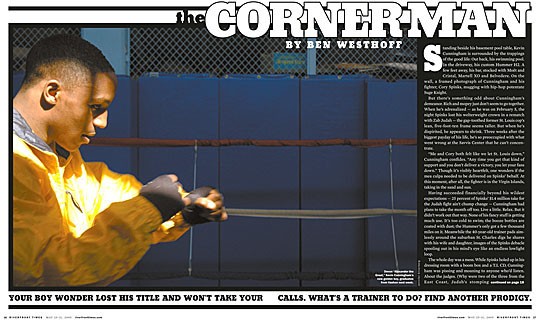 The day after the post went up, RFT received a call from activist Anthony Shahid, who claimed the author of the post, Chad Garrison, had denigrated Alexander in the piece and, further, that the perceived slap at the boxer was racially motivated. Naturally, RFT's isn't the only number Shahid has dialed in the intervening days, and, not coincidentally, Shahid's wasn't the only call we received in that same time period.

Anthony Shahid has a knack -- some might say an enviable knack -- for shooting from the hip. But in this instance, his aim is off. Way off.

Neither Chad Garrison nor anyone else at RFT has any beef whatsoever with Devon Alexander. I'm truly sorry that people believe we do. Over the years, we've had a great appreciation for what Alexander has accomplished and what he represents to the community.

In fact, RFT has been covering Devon Alexander's boxing career since he was a senior at Vashon High School. Back then, in 2005, staff writer Ben Westhoff profiled local boxing trainer Kevin Cunningham, whose marquee fighter at the time was Cory Spinks. But the "new golden boy" in that 2005 story was Alexander, already nicknamed "Alexander the Great".

Cunningham seems never to tire of touting his young star's academic prowess, in particular the fact that Devon will graduate with his class next month. (Two of Devon's older brothers, Lamar and Vaughn, work at Cunningham's gym and boast pro records of 10-1 and 5-0, respectively. 'Lamar and Vaughn are talented also. Devon's just a little more focused,' Cunningham assesses.)

Alexander says he intends to study business administration at a community college at some point, but not right now. When he talks about his future, he sounds a lot like his trainer: "Boxing taught me that hard work comes back to you. I don't really trip off of not being able to go to all the parties, because I already know that in the long run it'll pay off."

"That kid grew up in the ghetto and has never had a fight in his life outside the boxing ring," Cunningham marvels. "Kids like Devon come along once in a lifetime."

That same year, 2005, we tapped Alexander in our annual "Best of St. Louis" issue as "Best Local Boxer."

Last year, after Alexander fought at the Scottrade Center in another Don King event, we honored Alexander a second time as "Best Local Boxer."

And then a week ago Chad Garrison spread the word on our blog about the June 25 card. Noting that Alexander had lost the junior welterweight crown earlier this year, Garrison ventured to say that Don King's choice of venue, the St. Charles Family Arena, is better suited for the card than Scottrade, which had drawn a crowd of fewer than 10,000 when Alexander fought there last year.

Additionally, Garrison wrote that while Alexander is not fighting for a title this time, the undercard for the Family Arena show includes Ryan Coyne, a St. Charles High School grad who is facing off against champion Guillermo "El Filino" Jones of Panama for the WBA cruiserweight title. Garrison was of the opinion that the title fight might be "more interesting" than the main event.

Devon Alexander is black. Ryan Coyne is white. That's true, but so is the fact that one's fighting for a title and the other is not. Garrison would have written the same thing if both boxers had been black. Or if both were white. Or if the white boxer was the marquee name and the one who was fighting for a belt was black. Not all of us would agree that a Coyne title fight is more interesting than a fight featuring the more seasoned Alexander, but Garrison is entitled to his opinion.

As for Scottrade versus the Family Arena, why not look at it this way:

Home to the St. Louis Blues NHL franchise, Scottrade seats more than 20,000. If the June bouts draw like last year's card at Scottrade, the Family Arena will be approaching capacity -- and that will be a sight to behold.

For the record, I hope Alexander wins, and I look forward to RFT's future coverage of his career and his positive involvement in the local community. Same goes for Ryan Coyne.

For background on this story, check out our previous coverage: