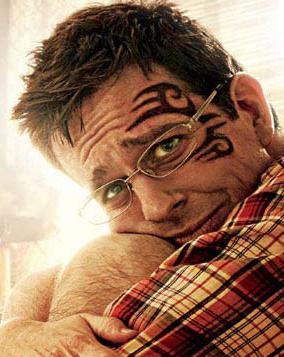 Fear not, bro-dawg cinephiles. The release of The Hangover Part II will not be delayed over a suit filed by a Missouri tattoo artist. You'll still be able to edify yourself Thursday with 102 minutes of (presumably) dick-and-fart-and-drinking jokes. Hurrah!

Tyson, of course, notably beat the air-skins to the best part of Phil Collins' tune "In the Air Tonight" and had a tiger nicked by the drunken protagonists of the first Hangover film. In the sequel, the nerd of the wolfpack wakes up before his own wedding with the same facial tat, and, one guesses, LOLs ensue.

And that's the rub of Whitmill's suit. He calls it a violation of his copyright, and sued to halt the release of the film.
In court this morning, U.S. District Judge Catherine Perry declined today to issue a preliminary injunction to block the film's release.

She made her decision orally, and transcripts are not yet available. But Perry reportedly stated that while Whitmill's suit against Warner Brothers was likely to succeed and bring him some serious simoleons, halting the release would harm theater owners and others who make their living off movies.

So the movie is still coming out Thursday as scheduled. We'll keep you posted on further developments.