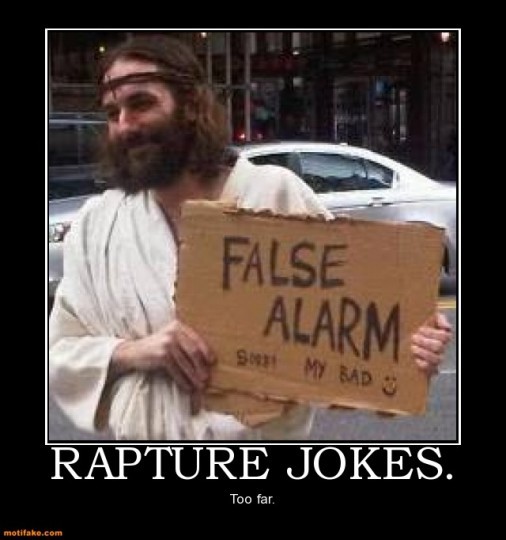 So, OMG, we all survived the rapture scheduled for May 21!

But now is not the time to start partying (or, for that matter, continuing to party -- you know who you are). It turns out that Sage Prophet Harold Camping wasn't completely, ridiculously misguided in his end-of-the-world prognostications. Nope! Turns out he just made a little math mistake.

The end of the world, we can report with great confidence, is now scheduled for October 21. It seems when Camping was ignoring Jesus' assertion that no one shall know the date or hour of his return was doing his little calculations to determine just when Jesus planned to show up, he got the year right, and he got the day right. He just messed up the month.


So, exactly five months from Saturday, we can go through all this hysteria/ hilarity all over again. Yippee!

The reasons for the turnabout have nothing to do with God ignoring Camping's schedule and the Family Radio empire needing to somehow, against all odds, save face after getting it wrong on 3,200 billboards worldwide. Turns out the old guy knew the truth all along, kind of, and it was just too complicated for the rest of us to get.

As Camping explained on his Family Radio (via the U.K's Daily Mail), "The great earthquake didn't happen on May 21 because no one will be able to survive it for more than a few days or let alone five months to suffer God's wrath because everything will be levelled and destroyed after that earthquake and there will be no food or water to keep everyone alive."

So originally the idea was that the rapture would begin with a ginormous earthquake on May 21. The believers would get swept up to Heaven; everyone else would suffer on Earth 'til God finally put us out of our misery and damned us to hell for good on October 21.

Now, the new version is that we're still going to hell on October 21, but the earthquake is going to suck so badly that it won't even begin until just before the day of reckoning. And God really did show up on May 21 -- but he was here "spiritually" instead of in physical form.

Of course the true explanation can't be that Harold Camping is simply full of shit and always has been. And that true Christians have always known this, even while the media/chattering class can't resist covering an outside-the-mainstream kook because they like to believe all Christians are kooks.