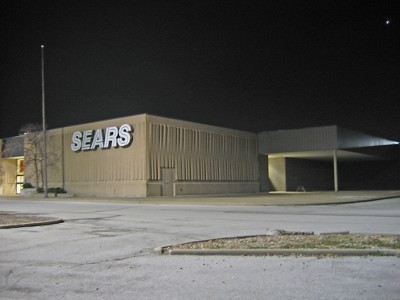 There are dead malls across America, littering the nation's suburbs like so many pieces of yesterday's trash.

St. Louis County is determined that north county's Jamestown Mall not be one of them. So despite the loss of Sears and Dillard's a few years ago, and despite the fact that JC Penney is pulling the plug on its "Outlet" concepts across the nation, thereby almost certainly leaving Jamestown with only one anchor tenant, efforts to save the 38-year-old mall are moving forward.

This Thursday at 6:30 p.m., the St. Louis County Economic Council and its consultant, Dover Kohl & Partners, will reveal a "final plan" for the site. If subsequently approved by the county council, that plan will serve as a roadmap for all future development on the site.

And while no one was willing to talk specifics with Daily RFT yesterday, and thereby scoop their own big reveal, they're will admit to excitement about the possibilities.

"I'm from north county, and I grew up shopping at Jamestown Mall," says Tom Curran, director of intergovernment affairs for the St. Louis County Executive Office. "I remember when it opened. And it's time for a new day at this location."

He adds, "I'm very excited about it."

The plan being presented Thursday won't come as a surprise to people who've been following the process, Curran says. After a 2009 study from the Urban Land Institute suggested scrapping the mall almost entirely in favor a north-county version of a town square that seemed to draw its inspiration principally from the Delmar Loop, the county hired Miami-based Dover Kohl & Partners to lead a community-based design charette. The consultants met with local residents for three days last September, then presented findings on what they believed was feasible for the site.

Thursday's presentation will be the first public look at the project since the work-in-progress materials developed last September.

"Since that time, the team has gone back to Florida, and they've done a detailed analysis to come up with the master plan," Curran explains. "We want to make sure people understand we're trying to include the community -- their vision for what can be there, tempered with market reality."

That "market reality" may prove a rude awakening -- Dover Kohl's initial plan found plenty of competition for Jamestown's target shoppers, and not quite as large of an underserved market as today's mall developers would surely desire. While the Jamestown site boasts capacity for an astonishing 1.25 million square feet of retail, Dover Kohl's report suggests there's only a market for 200,000 square feet of it. That's due to other shopping centers in the area, the place's imperfect location -- and competition from other sources that would have been unfathomable when Jamestown was built in 1973.

Jamestown and its sister mall in Chesterfield (opened in 1975) were built "in anticipation of waves of suburban development," Curran says, and oversized accordingly for future growth. But, he notes, "people didn't think about the Internet -- and, a lot of other malls developed since that became direct competitors." Online shopping plus a growing preference for open-air shopping centers and big-box retail dramatically changed the market.

So now Jamestown has no choice but to adapt to the new reality, Curran says. If you're curious to hear more about that and the road that Dover Kohl recommends taking, the meeting starts at 6:30 p.m. Thursday at St. Louis Community College at Florissant Valley, 3400 Pershall Road, in the student center multipurpose room.