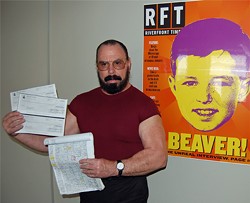 J.R. Moore's phone is ringing off the hook today.

"I know why you're calling," says Moore the moment he picks up the receiver. "It's a sad day, isn't it?"

For a decade, the 63-year-old Moore has made something of a name for himself in St. Louis impersonating his favorite wrestler, "Macho Man" Randy Savage. Savage, whose real name is Randy Poffo, died this morning after apparently suffering a heart attack while driving in Florida and crashing into a tree. He was 58.

"It's terrible," says Moore, a retired tree-trimmer and lifetime bodybuilder. "He was my man."

Moore first began impersonating the "Macho Man" in 2001, though he'd been a fan of the wrestler in his heydays in the 1980s and '90s. "Back then he wore his hair all frizzy," explains Moore. "It wasn't until around 2001 that he started slicking back his hair. I'd always had that look. I remember I was walking through the grocery story one day and people came up to me and said, 'You're on the cover of TV Guide!' That pretty much started it."

Moore says he's yet to figure out exactly how he'll mourn the passing of Savage. (We suggest a beer and a Slim Jim.) "I should probably go get my heart checked out," he says.

For the moment, though, Moore says he's almost afraid to leave his home.

"People might see me and think they've seen a ghost."