Sheriff's Department Invites Media Along for Sweep of Crime-Ridden Neighborhood 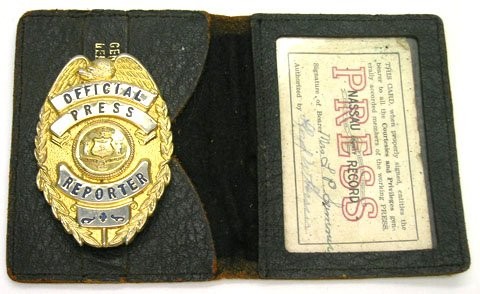 I've got to admit it. I enjoy the bravado of the St. Clair County Sheriff's Department, even as I occasionally question its chummy relationship with the press.

Every other month, it seems, the sheriff's department emails local media with something it considers so extraordinary that it can only be shared in person. Dutifully, much of the media responds, lugging its cameras and video equipment across the river for a press conference that -- truth be told -- rarely disappoints. (I think immediately of the unveiling last fall of the agency's armored, crime-surveillance vehicle, The Exterminator.)

Then there was the boldfaced email the department sent yesterday at 11:18 a.m. to the media. Here's how it read:


Multiple Illinois and Federal law enforcement agencies are going to conduct a major operation tonight. The media are invited to the briefing to be held at the Cahokia (Illinois) Police Department at 6:00 PM sharp. The location and specifics of the operation will be discussed then. The media will be invited to go along with the operation immediately following the briefing.

We respectfully ask those that are taking pictures or using video to not record the faces of the Officers because some of them will be undercover Officers.

That note was followed twenty minutes later with the addendum:


Reference the operation tonight it would be appreciated if nothing is reported ahead of time. I know that is tough but we don't want them to know we there until...we are there!

As the Belleville News-Democrat reports this morning, the crime sweep through the Parkfield Terrace neighborhood last night went according to plan, and the "media horde" was there to witness it all.

The crime-plagued subdivision outside Cahokia has played host to two unsolved murders, a roving gun battle and dozens of other crimes in recent months. Brendan Kelley, the county's prosecuting attorney (and the person who came up with the idea of the police-sweep-cum-press-junket), said he hoped the event would scare and/or shame the neighborhood's criminal element.

That said, at least one of the dozen people arrested Thursday night seemed more indignant than embarrassed. The BND quotes him yelling to a photographer: "Why you put me on camera? I ain't even did anything."
For those who want to see it, KMOX has a slideshow of the raid over at its website.