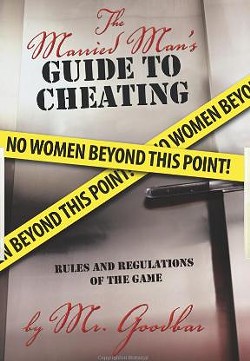 Mr. Goodbar is not his real name. But this much we know about him: He's a south Florida recording artist with a wandering eye and a blatant disregard for the Seventh Commandment. For years, Mr. Goodbar thought of sharing his knowledge in a book instructing his fellow married men on how to cheat on their wives.

"I wrote a few chapters and put it on the shelf," Mr. Goodbar tells Daily RFT. "Then the whole Tiger Woods' sex scandal broke, and I thought: 'You know what? There's a need for this.'"

Earlier this year, Mr. Goodbar published The Married Man's Guide to Cheating. And as you might imagine, the author's head is spinning this week with the revelation of yet another celebrity infidelity involving Arnold Schwarzenegger and a household employee.

Here, then, is the advice Mr. Goodbar would have given Schwarzenegger -- if only he'd had the chance.

Daily RFT:What did Arnold do wrong?

Mr. Goodbar: He didn't use protection! That's Rule No. 5 in my book. You got to use contraceptives. Arnie fucked up -- literally -- right out of the gate.

Still, he was able to hide the relationship (and the love child it spawned) for over a decade. How do you think he managed that?

To pull off an extra-marital affair you have to have hobbies. You have to have an excuse you can give your wife as to why you're not around. That can be golf, fishing, whatever. In Arnold's case, he's a very busy man. So I'm not surprised that he concealed the affair. He could tell his wife that he had a meeting or what not. It also helps to have money. That pays for silence. But where he really complicated matters is that he did this with a woman employed at his house. That's too convenient. You don't go banging someone just because you can. And you don't do it in your own house. That's just wrong.

It's unclear why Schwarzenegger finally confessed the affair to his wife Maria Shriver. Was he going to get caught, or was it the guilt? Assuming it's the latter, what advice do you give cheating men with a guilty conscience?

Alcohol. That's the best remedy. Go have a drink and you'll soon forget all about it. Believe me, I've felt guilty plenty of times, especially when things are going well with the missus. But, you know, some guys get tired of eating steak all the time. They want some pumpkin pie as well. Something for dessert.

Okay, but once the affair is known, what's a husband to do?