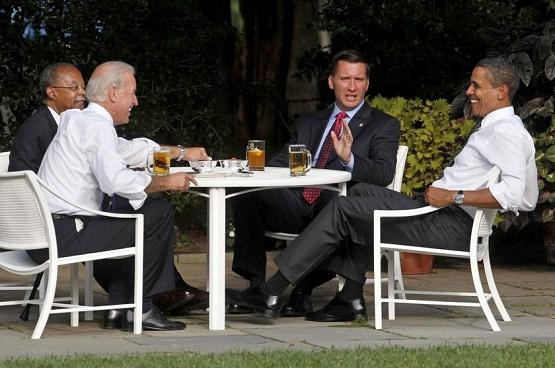 We had imagined yesterday's "smoking summit" for St. Louis area officials would look something like this. Only instead of beer, the table would be full of ashtrays and mounds and mounds of those famously cheap Missouri cigarettes.

After a bit of frank discussion, the officials would sit back and relax (share the proverbial peace pipe, if you will) and agree to an area smoking ban with none of the hodgepodge of exemptions that currently exist.

As the Post-Dispatch reports this morning, representatives from St. Louis City and Jefferson County failed to make the meeting. (Lewis Reed, president of the St. Louis Board of Aldermen, apparently got tied up in another meeting. The chairwoman from the Jefferson County Council was out of town.)

So, the grand summit ended up being a few councilmen from St. Louis County and St. Charles County staring at each other over a conference table. The meeting wrapped up in fifteen minutes.

The group plans a future get-together, in which they hope for better attendance. On second thought, perhaps they should offer beer at that next meeting. It always seems to draw a crowd.