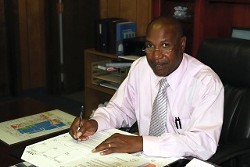 Update Tuesday: The Vinita Park city council voted 4-1 last night to have the beehive removed from the community garden. The bees must be gone in a week.

You may have heard today about the bee controversy over in Vinita Park.

The Post-Dispatch has a front-page article about how folks in the tiny suburb just north of University City are "buzzing" about the topic. KMOV Channel 4 has a follow-up airing today.

At issues is a beehive recently installed at a community garden on city property. The woman who put the hive there, 78-year-old Verna Gremaud, says she hopes the bees will pollinate the plants in the garden she helps maintain. Vinita Park's mayor, James McGee, frets that the someone might get stung and the city would be at fault. He wants the hive removed.

The City Council is to vote on the issue tonight. Here, though, is the back story that's not being reported. It's not about bees. It's a tale about politics. I know because I'm related to Gremaud. She's my mother-in-law and I hear the story quite often. Yes, I'm biased, but here's how it goes.

The story dates back to last April (2009) when McGee ran for mayor defeating Virginia Bira, who'd served as Vinita Park's mayor for 31 years. Bira and Gremaud, btw, are close friends.

McGee beat Bira by a count of 319 votes to 222. But here's the deal: Of the 548 votes cast in that election, 150 came from absentee ballots -- an unusual number for a tiny municipal election. And most all of those absentee votes went to McGee. So many absentee ballots were cast that the St. Louis County Police Department launched an investigation into the election.

In the end McGee was never charged with any wrongdoing, though the person who notarized the lion's share of his absentee ballots lost her notary over the issue. Ever since that investigation, McGee has been doing everything he can to harass Gremaud, who's not afraid to challenge the mayor. The episodes are many -- and petty -- and include McGee threatening to call the FBI on Gremaud.

To date, though, McGee has never managed to land a sting. That may change tonight.