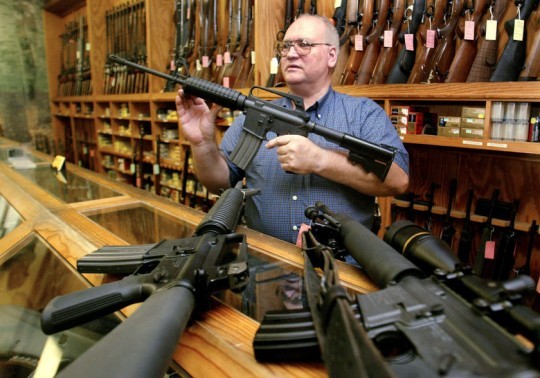 A St. Louis man convicted of second-degree murder after a children's birthday party turned into a crime scene received a reprieve today -- the Missouri Supreme Court struck down his conviction, sending the case back to the trial court for a re-do.

In a four to three decision, the state's highest court found that the St. Louis City Circuit Court judge supervising the trial of Anthony Brown wrongly allowed prosecutors "an end run around the law of evidence."

And it all has to do with the size of the gun.
According to the court's newly released opinion on the case, Brown had claimed he was acting in self defense -- that the man he shot at the party had a gun in the pocket of his sweatpants and had reached for it before Brown fired. Attempting to demolish that argument, prosecutors brandished a .38 revolver in their closing arguments, showing that it couldn't have fit into the pocket in question.

Only problem? The gun hadn't been admitted into evidence. There had been no testimony, in fact, that a .38 was even make of gun allegedly carried by the victim.

But when Brown's lawyers objected, Judge Thomas J. Frawley overruled them. Tellingly, later, when the jury asked to see the gun, Judge Frawley said no -- it "was not received in evidence."

As the Supreme Court justices conclude in their opinion, released today,

Consequently, the State's closing argument demonstration was necessarily speculative and carried with it the distinct possibility of misleading the jury. The State would not have been able to admit the .38 revolver evidence as evidence at trial. Therefore, the State should not have been able to bypass normal evidentiary limitations by first showing the revolver to the jury in closing argument to rebut Brown's self-defense argument.

As the justices conclude, the error was "not harmless."

"It is apparent that the jury attached significance to the State's demonstration because, during deliberations, the jury asked to see once again the .38 revolver, as well as the sweatpants worn by the victim," they write. And, as any OJ watcher could tell ya, if it doesn't fit, well, umm, you must convict.

We're happy to see justice done in this case, because it seems clear the prosecutors were permitted to pull a fast one here. (Not that we blame the prosecutors for trying, but really -- what was the judge thinking in letting them getting away with it?)

But we do have to ponder at least one important question raised by this case. Namely, since when do sweatpants have pockets?