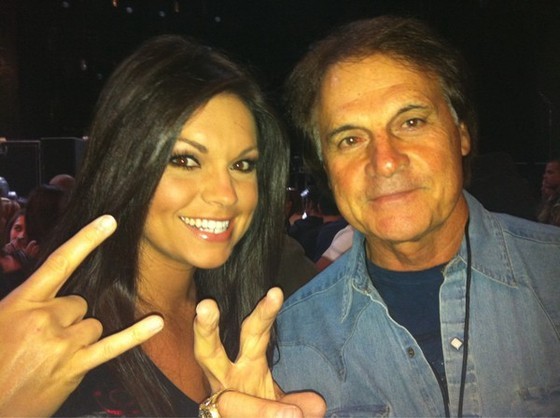 Stay with us on this: Tony La Russa's daughter, Bianca, just auditioned for and became a cheerleader for the Oakland Raiders.

La Russa is famously cagey about his personal life, so of course he won't mention his daughter or her life at any of his press conferences. But he's also a dad, and he wants to acknowledge Bianca's achievement in some fashion.

So, what's a longtime baseball manager do? He sends in a signal, a heavily coded signal, that lets his daughter know, "I'm proud of you, honey," while the opposing team (media/general public) remains in the dark. What's the signal?

Look at Bianca's shirt in the following photo -- notice any similarities between that logo and a certain dad/manager?

That blistered eyeball will soon be hidden by an eyepatch, mark our words.