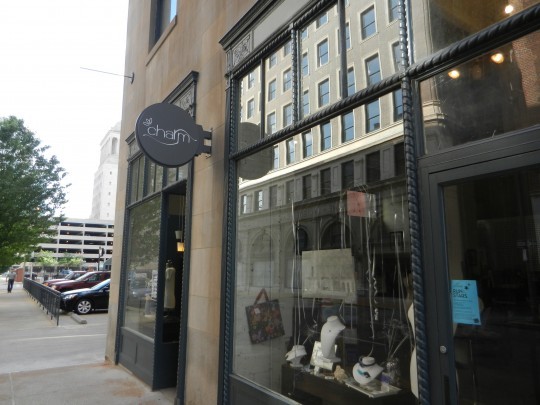 The corner of 11th Street and Locust was a true downtown success stories. You could meet your pals for brunch at hotspot Rooster -- and, while you were waiting, browse at four extremely cool shops just a block or two away. Left Bank Books for something to read. UMA or Salt of the Earth for something to decorate your home (or gift to a friend). Charm for something to dangle from your ear or circle your wrist.

But after this weekend, only one of those shops will remain: Left Bank Books. Salt of the Earth closed in the late fall. UMA is having a sample sale this weekend, but after that, its owner is moving to Chicago and the store is going online-only. And Charm owner Kari Kraichely is closing up shop after work Saturday -- she's moving her store to Maplewood.

As Kraichely tells it, she didn't want to move. But she had little choice if she wanted her little shop to stay in business in the long run.

"I've only been in the business four years," she says. "But if there's one thing I know, it's that retail has to be near retail." With her two closest neighbors closing, she saw the writing on the wall: "There haven't been a lot of new stores opening here. I didn't want to wait and see if someone would take that awesome corner spot" -- formerly UMA.

She adds, "People used to come in all the time and say, 'It's so nice you and UMA are so close together.' I am not a destination store. No one is going to come here from Chesterfield just to see me." With three cool neighbors right there, Charm had a chance. Not anymore, Kraichely says.

So she's closing her door downtown for good this weekend. In two weeks, she hopes to reopen at 7312 Manchester, right next to T. Rohan Interior Design, just across from the Shop N Save. At 900 square feet, it's almost exactly the same size, minus the gorgeous high ceilings she enjoyed downtown.

And as much as Kraichely has mixed feelings about leaving downtown, she has nothing but great things to say about her new suburban home.

When she first approached St. Louis City Hall in October 2007 with plans to open a small business, she says, the city's infamously byzantine bureaucracy was overwhelming. "I was told to go to five different offices," she says. "I was there two and a half hours -- I was about to pull out my hair."

In Maplewood, she says, "I made an appointment, and this older lady actually filled out my paperwork for me. I was in-and-out in 25 minutes." Even better: A city-supplied "retail consultant" actually drove her around, introducing her to landlords and helping her find her new space.

She knows that, in a big city like St. Louis, that's not realistic. "What they have going for them in Maplewood is they're super tiny," she says. "They don't have one small business like me coming in -- they have hundreds." And she credits the Downtown Partnership for working hard to help her find a way to stay downtown, even if it ultimately didn't pan out.

But, she admits, the experience in Maplewood was "like night and day."

"I do want to come back downtown," she says.  As a south-city resident, she believes in St. Louis, and "I know how important it is for downtown to do well, not just for downtown, but for the entire area. But, right now, I can't be the only one, or one of the only few. I can't do it."