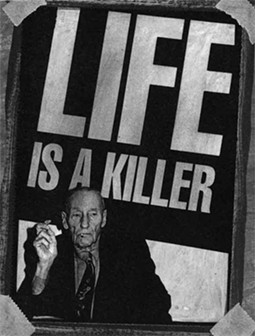 Picture it: Tangiers, 1959. William S. Burroughs, author of the newly published Naked Lunch (and, incidentally, scion of a wealthy St. Louis family), is visiting his friend Brion Gysin's restaurant when he meets John and Mary Cooke, a pair of wealthy American proto-hippies who appear to the author as vividly as if they are holograms. Burroughs realizes instinctively that this is to be a significant juncture in his life.

The Cookes, it turned out, were devotees of the Church of Scientology, then in its infant stage. John Cooke would be the first person to attain the status of "Clear." They were eager to spread their gospel, and Burroughs was an ardent recipient.

Over the next decade, Burroughs would prove a devout student of Scientology. He, too, would reach "Clear" status, and he would write about Scientology frequently during the 1960s, most notably in his 1962 novel The Ticket That Exploded.

Eventually, he would break with the church over what he called founder L. Ron Hubbard's "fascist policies," though he believed that some Scientology concepts could prove useful. Burroughs' defection led to a public feud with Hubbard, complete with rage, denunciation and angry articles from both sides.

Novelist Lee Konstantinou has the whole weird-ass story over at the science-fiction blog io9. Konstantinou claims it's all there at the New York Public Library. No kidding.

Gettin' All Religious Up in Here Books