Police Respond to Rash of Violent Crime in Dutchtown 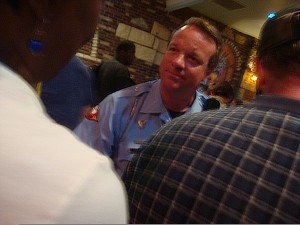 Perhaps it's no coincidence that three of the most notorious murders in the city this year -- the killing of U.S. Marshal John Perry; the unprovoked assault on 72-year-old Hoang Nguyen as he walked home from the grocery store; and this week's killing of Paul Reiter, who investigators believe was shot after interrupting a burglary next-door -- all occurred in the same neighborhood: Dutchtown.

With that in mind, the St. Louis Metropolitan Police Department held a town hall-style meeting yesterday, announcing a new initiative to stem the violent trend and assuage people's fears. The message was clear: Help us help you.

"The number-one preventer of crime are citizens; we can't be on every corner and every porch," said First District Captain Dan Howard, who led a discussion that also included Chief Dan Isom, Circuit Attorney Jennifer Joyce and Mayor Francis Slay.

The banquet hall of Grbcic's Restaurant was filled with scores of citizens like Tom and Barb Saito, whose Elier Street house was burglarized on Holy Saturday while they were at a Cardinals day game. They returned home early to prep for the holiday, only to find their house ransacked and car stolen.

"We don't want this neighborhood to go down the tubes," says Barb Saito, a 34-year resident of Dutchtown. "Obviously there needs to be more police protection, and as neighbors we need to watch out for each other."

The new police initiative, called "Dutchtown Now," creates a new full-time position for a police officer who will devote himself to the neighborhood. That officer, Keith Novara, will be the "face of the police" for residents, says Howard; in a couple weeks, he will move into a newly established substation at 3840 Keokuk.

Novara, who has a friendly demeanor, rides a Harley Davidson and has previously served as a detective investigating sex crimes and child abuse, has already been nicknamed "Dutch" by his colleagues to signify his new post.

In Dutchtown, a neighborhood with 18,000 residents, 55 percent of crimes do not get prosecuted because there is no cooperation with victims or witnesses. "Citizen involvement is not only a good way, but the only way to make a neighborhood safe," said Joyce.

"You are the 800-pound gorilla in the criminal justice system," she added. "You don't know it, but you are."

At the end of the meeting, residents were encouraged to sign up to become block captains, mobile patrol volunteers and victim's-advocacy supporters. The reaction among audience members was generally warm and enthusiastic. "We're kicking into gear, and once it's in gear, it's going to work," says 15th Ward Neighborhood Stabilization Officer Judy Lane.

Still, others prefer results -- not more talk and glad-handing by city officials.

"I'm looking for some solutions to these problems," says Valerie Holmes, who attended the meeting with her young son. She says she frequently witnesses drug hand-offs outside her window on Meramec Street. "Every time we get up in the morning and turned on the news, someone just got killed," she says.