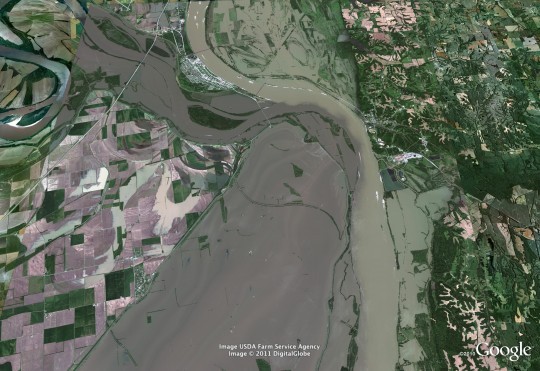 After we detailed our road trip through the flooded Missouri Bootheel and Cairo, Illinois, in a blog post yesterday, we heard from someone at Google, who generously offered to share the above photo with our readers.

This aerial view, taken within the last 48 hours, shows (on the left) the giant watery superhighway that the bloated Mississippi River has become, thanks to record-high water levels followed by an intentionally demolished levee. And, on the right, you can see that the Ohio River has also expanded beyond its usual footprint.

That tiny little pocket between them in the top center of the photo? That's Cairo.

For a sense of just how full both the Ohio and Mississippi are, compare the recent picture Google provided us with a different Google Earth image we've posted below -- this one taken on a day long before rains brought these two mighty rivers to near-record levels. 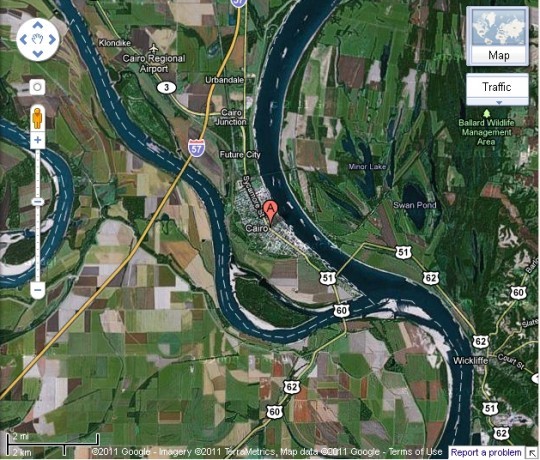 In that photo, the Mississippi is just a thin ribbon -- and Cairo looks firmly planted on land. (In the more recent photo, it looks like nothing more than a life raft surrounded by rushing water.) It definitely puts in perspective just how much trouble Cairo was in, and how much the land around the riverbed has been affected by the U.S. Army Corps of Engineers' decision to save Cairo and blow up the Birds Point levee.