Jose Reyes to the Cardinals? Makes Sense, But Who To Trade for Mets Star? 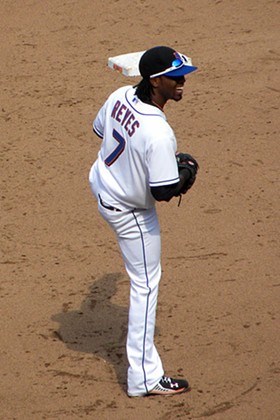 The New York Mets are in bad shape financially. Their owners are on the hook for a Bernie Madoff-related bundle, and have a portion of the team up for sale in hopes of retaining some sort of solvency. Against such a grim backdrop, the team will likely have to make some very painful, very difficult decisions in the coming months related to players and their salaries.
The name most commonly coming up as a potential salary dump for the Metropolitans is Jose Reyes, and various bits of scuttlebutt here and there have suggested the Cardinals as a possible landing spot for the shortstop. Just how realistic is such a scenario?
Well, first off, projecting Reyes to the Cards makes a ton of sense, at least from a need standpoint. There are teams with bigger needs at shortstop than the Cardinals, certainly, but not a whole lot of them. Ryan Theriot has done a decent enough job getting on base out of the leadoff spot, but his .661 OPS isn't exactly all-star material and his defense has left plenty to be desired.

Reyes is a couple years removed now from the days when he was appointed the Most Exciting Player in Baseball by Joe Morgan, and has seen tough times since then. Over the course of 2009 and 2010, Reyes played in just 168 games total, dealing with a calf injury in 2009 and a thyroid condition in 2010. His physical issues appear to be behind him now, as he's been healthy since getting his thyroid under control.

So just how much of an upgrade would Reyes be over Theriot? Well, last season, while playing in 133 games and struggling to get out of the gate following a long layoff, Reyes was worth 2.8 wins above replacement. So far in 2011, he's already been worth 1.7 WAR. In 2008, Theriot posted his best professional season, playing in 149 games and putting up a 3.1 WAR. So, Theriot's best season = down year for Reyes. Theriot has been worth at least two wins in a season twice in his career, in 2008 and 2009. Reyes has been worth two wins or more six different times (and is almost there already this year), with a run from 2006-2008 of 5.7, 5.5, and 6.0 WAR.

Consider also the respective ages of the players. Theriot is 31, Reyes is 27. (He'll turn 28 in June.) Four years is a lifetime in baseball years. Reyes is currently OPSing .858, and while that number will likely regress a bit, an .800+ season is most definitely not difficult to imagine.

Suffice to say, Reyes would be a big, big upgrade for the Cardinals. He isn't exactly a walk machine, by any means, but he offers damage with the bat at the top of a lineup Theriot just has no chance of equaling. He's also a marked upgrade on defense, though in fairness to Theriot he shouldn't be quite as atrocious as we've seen him be so far in 2011.
So now for the other question. What would it take for the Cardinals to bring Jose Reyes in? He's going to be a hot commodity if he does indeed hit the trade market. He isn't signed beyond this season, so he should be seen strictly as a rental, which will push his value down a bit. Still, he could also bring draft-pick compensation if the Mets chose to keep him and offer arbitration (not a guarantee considering their financial plight), so that goes back on the positive side of the ledger, value-wise.