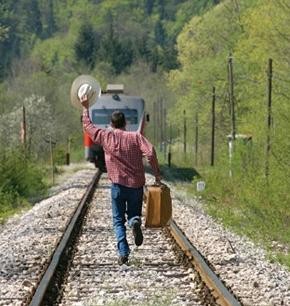 The U.S. Department of Transportation announced today its plans to spend the $2 billion that Florida Governor Rick Scott rejected this year for high-speed rail in his state.

Here in Missouri, Governor Jay Nixon had sought $1 billion of the money turned away by Florida. Nixon had hoped to spend the cash to improve the passenger rail line between St. Louis and Kansas City. But that was before Missouri's Republican-controlled Legislature caught wind of the plan and swiftly derailed Nixon's idea. According to the Republican lawmakers, it somehow would be fiscally irresponsible for Missouri to spend $4.5 million of its own money (a.k.a. $1 state dollar for every $222 federal dollars) in order to land the grant from Washington.

Anyhoo, it's a moot issue now as the Department of Transportation says it will spread the $2 billion out among fifteen states. The nation's northeast corridor will get the bulk of the funds -- $800 million --- for trains that can reach 160 mph. Some $400 million will go to the Midwest, where much of it will be spent on the rail line between Chicago and Detroit.

California will get $300 million for trains that could travel 220 mph between Los Angeles and San Francisco.