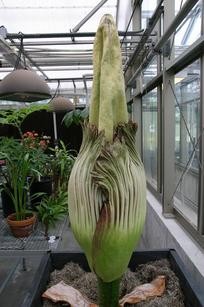 We know how it is. You love your mother, but deep down you harbor a true resentment for her special day. For you, Mother's Day is the worst kind of made-up holiday, requiring you to either present Mom with something mawkishly sentimental or face the consequences -- namely, a year's worth of the soul-eating guilt that only the woman who birthed you can dish out.

Which is why you might take perverse pleasure in the press release today inviting the public to a special Mother's Day weekend viewing of the corpse flower at University of Missouri-St. Louis.

As its name suggests, the corpse flower is no rose. In fact, it isn't a flower at all. It's the world's largest inflorescence -- a plant from Indonesia that stands up to four feet tall, releases a pungent odor similar to rotting meat and has a phallic-like shaft where its petals would be.

The University of Missouri-St. Louis is waiting patiently for the spectacular and rarely seen plant, known as a corpse flower, to bloom at the university's greenhouse. It's been two years since a corpse flower last opened at UMSL and eight long years before that. The plant is currently developing a bud and while it's anticipated bloom is expected soon, the exact day cannot be predicted. When it does finally happen, it will only be in full bloom for 12-20 hours. It has bloomed in only two other places in the Midwest and less than 100 times in the entire United States.

The public is invited to view the corpse flower and its developing bud for free at UMSL's greenhouse from 1 to 5 p.m. May 7 and 10 a.m. to 5 p.m. May 8 during Mother's Day weekend. Visitors may park in the Benton Hall lot or along West Drive on campus.

Titan Arum, whose scientific name is Amorphophallus titanum, is actually not a flower at all, but an unbranched inflorescence -- the largest in the world. A native of Sumatra, an island in western Indonesia, it is known for its pungent odor similar to rotting meat, which the "flower" gives off when it opens. The smell is designed to attract carrion beetles that pollinate the plants.

"This plant is unpredictable and fascinating. You never know when it will bloom," said Kathy Upton, research specialist and greenhouse manager at UMSL. "When it finally happens it's really exciting. It has so many interesting features -- from its odd shape and stinky odor to its giant size and ability to heat itself up to above room temperature. You don't want to miss seeing this incredible plant."

Upton has grown the plant for the past 16 years after receiving seeds from Jim Symon, a collector. This particular plant bloomed in 1998, making it the first to bloom in the U.S. since 1939.

The current bud being cultivated by Upton is the fourth plant to produce a flower from the original seed batch. This particular plant has been nicknamed "Archie" and has two siblings that bloomed in 2001 and 2009. For more information check out UMSL's Department of Biology online.