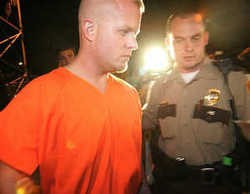 If you're among the 13 percent of Daily RFT readers who predicted it would take two days for the jury to reach its verdict on Christopher Coleman, congratulations. You should apply for a legal analysis job with truTV.

After deliberating since Tuesday afternoon, the jury yesterday announced its decision around 7:40 p.m., finding Christopher Coleman guilty of three counts of murder in the killing of his wife, Sheri, and two sons, Garett and Gavin. The verdict came two years to the day that Coleman strangled them as they lay sleeping in their beds inside the family's Columbia, Illinois, home.

Today jurors will reconvene for the penalty stage of the trial.

The prosecution is seeking the death penalty, though Coleman will probably serve a life sentence without parole. Earlier this year, Illinois Governor Pat Quinn signed into law a measure that effectively ends capital punishment in the state beginning July 1. Technically that gives prosecutors a window to seek the death penalty for Coleman, though Quinn has vowed to commute any such sentence prior to the new law going into effect.