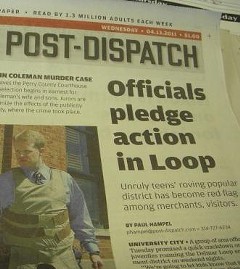 Lee Enterprises, the Iowa-based company that owns the St. Louis Post-Dispatch, the Arizona Daily Star and a host of smaller newspapers, has issued a press release that explains a bit about that very bad day the company had earlier this week.

As we reported, the company had previously announced plans to refinance $1 billion in long-term debt (much of it accrued in the acquisition of the P-D and other Pulitzer papers). That would have headed off the vulture investors who were rooting for the company's bankruptcy -- always, sadly, a great way to rake in the bucks for the money guys who invest in troubled companies. But the company unexpectedly announced Monday it was jettisoning that plan, citing only unspecified "market conditions."


As we'd speculated in our post Tuesday, Lee's crappy second-quarter earnings report was a factor in the refinancing plan being scrapped. (Instead of revenue being down 1 percent from the year before, as it was in the first quarter, this time it dropped 3.8 percent from its 2010 comparison.)

As Junck writes, "bumps in the economy and a slowdown in revenue recovery for the industry and Lee" queered the deal. Then, after that, the stock market "reacted negatively to recent news" about the refinancing plan falling through. Not good.

So, what's the new plan?

"Refinancing our debt remains among our highest priorities," Junck writes. In coming months, "as our local economies regain steam and our revenue trend again turns upward," they're hoping for a chance to do just that.

"We are not, as some in the national media have imagined, staving off bankruptcy," she insists.

But that doesn't mean everything is hunky-dory at Lee's newspapers.

"Although this small slip backward is disappointing, we believe it is temporary and that our revenue trends will improve again as economic conditions in our market also improve," Junck writes. "To hasten the turn, we have begun rolling out even more initiatives to drive print and digital revenue. In the interim, we are also tightening our belts."

Let's restate that last bit for the record: Lee is tightening its belts. The same company that reported last November that its compensation had declined 4.6 percent from the year before, that the number of full-time employees had dropped 5.4 percent and that newsprint volume had declined 6.2 percent.

We left a message for Lee's vice president of communications. We'll let you know if we hear back.