"Cards-Cubs Bridge" Could Be Name of New Mississippi River Span 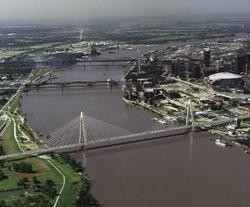 Although we're still in favor of selling the naming rights to the new Mississippi River Bridge going up north of downtown St. Louis, state senator John Lamping (R - Ladue) might have the second-best suggestion.

This week Lamping offered an amendment to a current bill that would name the bridge the "Cards-Cubs Bridge" for motorists crossing the structure from Illinois. Drivers leaving Missouri would be greeted with a sign announcing it as the "Cubs-Cards Bridge."

Lamping's suggestion could appease legislators in both Missouri and Illinois who have to sign off on the name. And it's certainly better than the current proposal: "Jerry F. Costello-William 'Bill' Clay Sr. Veterans Memorial Bridge."