Ashcroft Now In Charge of Ethics for Blackwater 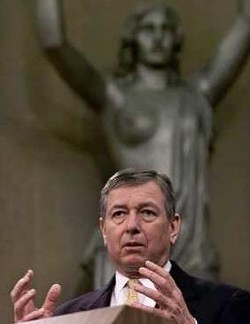 We'd say that this arrangement seems to be like the fox watching the hen house. But that's not quite accurate. It's more like the reverse. The hen is watching the fox den. (If such an expression exists.)

Former U.S. Attorney General (and past Missouri governor and U.S. Senator) John Ashcroft has a new title for his resumé: head of governance at the security firm Xe Services (previously known as Blackwater).

According to Xe, Ashcroft will "maximize governance, compliance and accountability" for the company and "promote the highest degrees of ethics and professionalism within the private security industry."

Blackwater changed its name to Xe two years ago in order to distance itself from its tarnished reputation providing security for the U.S. military in Iraq.

Just this month, federal prosecutors won an appeal to reinstate a manslaughter and weapons case against four Blackwater employees accused of gunning down fourteen Iraqi civilians in 2007. The firm's employees were also said to engage in steroid and cocaine fueled parties in Iraq, in which a few of them would run around naked.

As attorney general, Ashcroft was a proponent of the Patriot Act but also reportedly nearly resigned over the Bush administration's use of warrantless wiretapping.

After stepping down as attorney general, Ashcroft went on to found the Ashcroft Group, a law and consulting practice with offices in Washington, D.C., and Kansas City.