The Cards' Third Base Curse Strikes Again: Freese Out Longer than Expected 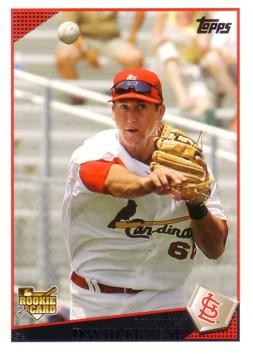 Monday was a bad day for the Cardinals. They opened up a four-game series against the Florida Marlins with a 6-5 loss, the second day in a row they had given up that many runs to an opponent. Since reaching five games over .500, one of Tony La Russa's benchmarks for a successful team, the Cards have dropped two in a row. Kyle Lohse wasn't terrible, but was definitely bad enough he deserved the loss. There was some good news on the scoreboard, as both the Brewers and Cubs lost, but it was cold comfort after watching Mitchell Boggs fail to hold a tie game in the late innings.
Worse than any single game, though, was the news the Cards received about David Freese. Originally expected to be out somewhere in the 4-6 week range, it was determined yesterday Freese will need surgery on his broken wrist, including the insertion of a plate, and will likely miss eight weeks, maybe even longer.
It's just the latest in a long series of physical setbacks for Freese, who is beginning to edge into injury territory that usually gets a player his own Movie of The Week. A shame, too, seeing as how he's been a remarkably productive player any time he's been on the field.


Make no mistake, this is a problem for the Cardinals. Beyond the obvious cursed positional problem (Troy Glaus and his mysterious season-long hangnail, Scott Rolen losing his arm in a low-speed collision with Hee Seop Choi, and Freese's ankles, which are now required by law to be described as "surgically repaired" any time they are mentioned), there's the more pressing question of who will man third base now until Freese comes back to play 22 games in August before being diagnosed with Exploding Eyeball Syndrome.
The leading candidate currently on the team would seem to be Daniel Descalso, who has shown remarkable defensive ability at the hot corner. The only problem is his .640 OPS, which is a significant step down from Freese's current .878. Nick Punto could also see significant time, given his versatility on defense, but if Descalso's current .640 OPS is an issue, Punto's career OPS of .644 has to be considered a problem. Plus, with Punto currently nursing a hamstring issue of unknown severity it isn't clear how physically sound he'll be in the near term anyhow.
Tyler Greene will probably see plenty of time in the middle infield, at least until Skip Schumaker returns to his gig of waving fruitlessly at grounders as they head to the outfield. It's unlikely Greene will see much time at third, simply because he's needed elsewhere more at the moment.
Allen Craig would be an interesting candidate, but it doesn't seem the Cardinals consider him a viable option there. (I have some thoughts on this, but I'll put them in a post after I come up with a better way of formulating a cogent argument.) That's really it as far as options already on the team.
Bringing up Matt Carpenter presents an intriguing option, but there are reasons not to expect to see Carp2 in St. Louis any time soon. Azruavatar over at Future Redbirds did a nice job of articulating those reasons earlier, so I'll just refer you to that post. Personally, I'm still hoping to see Carpenter here sometime relatively soon, but I'm not really expecting it.
As far as external options, there are a few here and there, but nothing that really screams out good deal. I think the Cards might also be hesitant to hit the trade market to fill such a temporary void, particularly when there's reason to believe they might be looking to deal for bullpen help at some point in time this year. (Heath Bell's name has been bandied about, though I think his price tag might end up a bit rich for the Cards' blood.) The Cardinals already have an impressive stable of utility players, so that doesn't seem a likely acquisition, either.
For better or worse, I think we're pretty much stuck with options we already know. And really, that might not be the worst thing in the world; injury auditions can sometimes lead to all sorts of unexpected consequences. At the very least, there are options available who offer a slid glove at the position, which hasn't always been the case. (I'm sure we all remember Joe Thurston.) Still, if the Cards are running a Descalso/Punto platoon out to third base for the next two or even three months, there's no question the offense is going to suffer for it.
Then, of course, we have to worry about Freese's offensive output when he does come back; wrist injuries are notorious for sapping a player's power. Then again, it might be better to postpone fretting about David's hitting after he returns until he proves this wrist injury won't be fatal. It certainly wouldn't be the strangest thing to ever happen to a third baseman here in St. Louis.