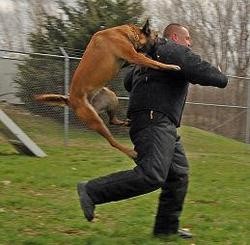 The St. Louis department is the recipient of two new police dogs courtesy of the St. Louis Police Foundation.

The foundation officially donated the German Shepherds today at a news conference at police headquarters. Since its inception in 2007 the St. Louis Police Foundation has raised more than $1.2 million to fund items not covered by the police department budget, including sniper rifles, ATVs, dashboard cameras and Clyde, a horse for the mounted patrol.

And while the new canines might not be as cool as sniper rifles, they do have really cool names. Dragon is a 15-month-old male that specializes in searching for explosives. Hondo is a two-year-old male skilled at recovering narcotics.