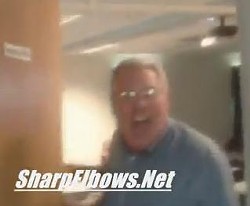 A lecturer at University of Missouri - St. Louis and a right-wing blogger were arrested Saturday following a fracas in one of the school's hallways. The incident involved Don Giljum, a teacher of a labor studies class at the university, and Adam Sharp, who goes by the online handle Sharp Elbows.

Last week a video montage of Giljum popped up on conservative blogs, showing the professor telling his students that it's okay for union workers to use violence during contract negotiations. After originally airing on the right-wing website BigGovernment.com, the video was subsequently removed after it turned out that the clip was highly edited to make Giljum's statements worse than they were.

Hoping to produce another scandalous video of Giljum, Sharp visited UMSL Saturday to confront the professor. During a break in Giljum's class, Sharp walked up to the professor in the hallway with his camera rolling. Giljum wasn't too pleased.

Giljum responded "never" and said the Breibart video was taken out of context. He then asked if Sharp was behind the "internet hatchet job" earlier in the week. When Sharp responded that the video wasn't a hatchet job -- they were Giljum's words, after all -- the professor allegedly took Sharp's camera and threw it to the ground. Sharp then pulled another camera from his pocket and continued to film this scene:

You can read Sharp's account of the dust-up here. Unfortunately, Daily RFT was unable to reach Giljum for comment -- though we'd love to hear your side of the story. (Hint, hint.)

Saturday, btw, was not the first time Sharp has made minor headlines for his "journalism." Last year he accosted KTVI reporter Charles Jaco while the latter was in the field reporting a story. When Jaco finally gave the pestering Sharp him a chest bump, the blogger filed charges against Jaco that were eventually dropped.

H/T: St. Louis Activist Hub, which has an audio interview with students who witnessed Sharp's run-in with Giljum.