First things first: Surprises Galore is the worst Bond Girl name ever. You know it, I know it, the American people know it. So don't be afraid to say so.
Anyhow, rounds two and three of the NFL have come and gone, and the Rams went way off script for both of their day two picks. Actually, I shouldn't say they went off script; we don't really know what they had written on their script, after all. But in terms of what most outside observers expected (including yours truly), they definitely made a couple of very surprising picks.
I'll certainly give Billy Devaney this: he's not at all afraid to gamble and pick players based on the Rams' own internal evaluations, with little concern for the prevailing wisdom. Of course, football history is littered with the corpses of general managers who outsmarted themselves, but that's just the chance you have to take. Omelettes and broken eggs and all that.
Internet hack review of the Rams' picks after the jump. Exciting, no?
Round 2, Pick 47 -- Lance Kendricks, TE, Wisconsin
I do not like this pick at all. I do not like it, fans of football. I do not like it picked by a fox, or stuffed in a box, or covered in lox. I do not like it made by a mouse. I do not like it on top of a house. I do not like this pick at all. I do not-- oh, you get the picture.
Let me be clear as to why I don't like this pick. My dislike has really nothing to do with who Kendricks is as a player, and everything to do with what the Rams left on the table. Kendricks himself I actually like pretty well. He's a fairly similar player to Kyle Rudolph, who I was a big fan of, and could very well end up contributing in a meaningful way to the Rams' offense. He isn't quite as big as Rudolph, but has better speed and tremendous leaping ability that allows him to high-point the ball and stretch the seams downfield. In short, what Lance Kendricks brings to the passing game I think the Rams can benefit from.
Where I jump off the wagon for this pick is when I look at the players still on the board who went after Kendricks. Marvin Austin and Stephen Paea, a pair of defensive tackles, were both still available. Either one would have represented a substantial upgrade to the Rams' situation at D-tackle. Mikel LeShoure and Daniel Thomas were both still on the board, and either one could have solidified the Rams' backup running back position and served as Steven Jackson's understudy. (In case you haven't noticed, the Rams kinda need to find someone to take a few carries now and again, regardless of what Jackson himself might have to say about it.) The one that really gets me, though, is Rodney Hudson. An offensive guard from Florida State, Hudson would have been a great value at a position the Rams desperately need.
It's not that I don't understand what the Rams are trying to do. The wide receivers they wanted weren't available when they picked, so they went for the next best thing. By bringing in a second pass-catching tight end, they're looking to emulate the model the New England Patriots used for their offense in 2010, with two tight ends both working as receivers. But after watching the offensive line get blown up in the middle game after game after game last year, I just can't believe they passed on an opportunity to grab an upgrade on the interior.
I like Kendricks as a player, but I think the pick was a reach, and the Rams had an opportunity to fill so many more important needs with this selection.
3rd round, Pick 78 -- Austin Pettis, WR, Boise State
I was really hoping for Wisconsin G John Moffitt here, but he went off the board just four selections earlier. Pettis is a pretty good consolation prize, to be honest. 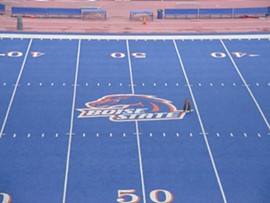 ​I can't get behind this pick totally, because I still think there were other positions the Rams could have upgraded here that were more pressing. With Mason Foster still on the board at linebacker, the Rams could have shored up the weakest area of their defense, but chose not to. However, I like this selection better than Kendricks in the second round, because I think Pettis was closer to being the best player on the board.
What Pettis does really well -- and what the Rams are counting on him for, I'm sure -- is catch the ball. I know that probably sounds simplistic, given his position is receiver, but never underestimate how valuable it is to have a player who can haul in tough catches. Pettis's best asset is his hands, as he excels in the possession game and rarely lets a ball he can reach get away from him. Pettis reminds me a little of Brandon Gibson, who the Rams already have, but with some added height that allows him to go up and get balls Gibson can't. His top-end speed is just adequate for a wideout, but he's tough over the middle of the field and has impressive YAC skills. Pettis almost never goes down on first contact, instead fighting for every last yard on every play.
I will say this for the group of receivers the Rams are putting together: Sam Bradford should have some very big targets to throw to. Kendricks is 6'3", as is Pettis. Danario Alexander is 6'5". Mike Hoomanawanui is 6'4". They're handsy, too. Handsy like my seventh grade health teacher. Illinois Mike showed solid hands last year, Gibson (if still on the roster), can make tough catches in traffic, and both of the newcomers are known for their possession skills.
Overall, day two of the draft for the Rams looked like Billy Devaney going out and getting the pieces Josh McDaniels wanted to install in his offense. In doing so, the Rams markedly upgraded their passing game, which had to be one of the big goals going into the draft. Still, looking at the two players they picked, I have to wonder if those selections wouldn't have done more good going toward other positions.
So far I love one pick, like one, and hate one. And really, even the one I hate isn't about the player, just about the position. I think the Rams have brought in three very talented, useful players who should all be able to contribute. Still, I don't feel like this has been an efficient draft at all. They've upgraded spots where they were already solid, while not really filling in any of the major holes as of yet.