Winners and Losers On Day One Of the Draft

The first round of the 2011 NFL Draft is in the books, and there's plenty to talk about before round two starts up again tonight. Cam Newton was picked first overall and fellated unceasingly by pretty much everyone with a microphone for the rest of the night. The lockout scared a bunch of teams into taking quarterbacks who might not otherwise have. The Oakland Raiders went all Pinky and the Brain and did the same thing they always do, taking a player with off-the-charts athleticism and off-the-charts character concerns. All in all, it was a rich, full day.
Here are, in my humble estimation, the three biggest winners and losers of the night.
Winners
The Cleveland Browns -- There's a reason you don't often see a bunch of trades at the top of the draft. It just costs too much to move very far when you're talking about those top picks. Nevertheless, the Atlanta Falcons made one of the boldest deals you're ever going to see, trading all the way up to number six overall to take Julio Jones with the Browns' pick.
The reason the Browns get the win here is because Atlanta literally traded the farm for the pick. The Browns moved from 6 down to 27, but in return for that move they received Atlanta's second- and fourth-round picks in this year's draft, and the Falcons' first- and fourth-round picks in next year's draft.
You don't often see a team acquire four extra draft picks all in one fell swoop, but that's exactly what the Browns did, and very well could have moved their rebuilding schedule up a couple of years in the process. Congrats to our old friend Pat Shurmur on his new war chest of draft picks.
The University of Missouri -- There were two college programs that saw two of their players drafted in the top ten in the draft. One was Alabama, one of the most traditional of collegiate powerhouses and Nick Saban's stomping grounds. Not a huge surprise there.
The other university to produce two top-ten picks might be a bit of a surprise, though. It was Mizzou, with Aldon Smith and Blaine Gabbert going at seventh and tenth overall, respectively.
It's impossible to overstate the kind of exposure something like this gives a program. Mizzou has been seen as a rising program for quite some time now, the product of a brilliant offensive scheme and strong coaching presence. Now, though, the Tigers have a pair of top-ten draft picks to wave around for potential recruits to go along with other high draft picks of the recent past like Jeremy Maclin, Sean Weatherspoon, Ziggy Hood, and William Moore.
Congrats to Gary Pinkel and his staff on their new war chest of potential recruits who want some of that Tiger draft magic for themselves.
Julio Jones's Outfit -- Athletes can be kind of a sketchy bunch, fashion-wise. Every once in a while you'll get one who really knows how to turn out the sartorial splendor, but more often you get ill-fitting suits on men more used to gym shorts or the cheerful but still unpleasant vulgarity of a Deion Sanders. 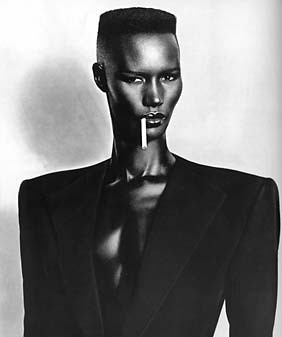 ​I've got to say, though, I'm really digging Julio Jones's crimson shirt and silver bow tie combo underneath a grey suit with just the perfect amount of pattern. The crimson was a nice nod to Alabama, as well as a good choice for Julio's skin tone, and the silver bow tie was all class all the way. It takes a special kind of man to rock a bow tie successfully. We may not know yet what sort of receiver Julio Jones is, but we already know what kind of a dresser he is. If there were a fashion draft (and oh god, how I wish there were), Julio would have gone first overall easy. Just try to ignore the fact he looks a little like Grace Jones.
Losers
The Atlanta Falcons -- I'm sure there are plenty of people who will laud the Falcons for their bold move in trading up 21 spots to nab Julio Jones, but I'm not one of them. It's not that I don't believe in Jones. I think he's going to be a very good receiver, and the combo of Jones and Roddy White should make Atlanta more than a handful for any team to face. NFC South cornerbacks are going to be getting a whole lot less sleep this year.
Even so, history has shown time and time again that trading away huge loads of draft picks to get one particular player just doesn't work. Ask Mike Ditka how Ricky Williams worked out for him. Draft picks are just too important to give up a whole heap of them to pin all your hopes on just one player.
The Falcons may look awfully good this coming season, but I think when you look at the load of players the Browns will get with all the picks Atlanta traded away we'll all be wondering what in the world the Falcons were thinking.
Prince Amukamara -- Going into the draft, Nebraska's Prince Amukamara was seen as the second-best cornerback and a top fifteen lock. He fell to the New York Giants at nineteen, which isn't a huge fall, really, unless you consider the teams that passed on him.
Specifically, the two Texas teams must have both gotten together and decided they weren't taking Prince no matter what happened, and then gone through some sort of elaborate friendship ritual to seal the deal. The Dallas Cowboys have exactly one good player in their secondary, Terence Newman, and he'll be 33 this year. The Cowboys went with an offensive lineman, which makes sense, but how they passed on Amukamara I don't quite understand.
Even more baffling is the Houston Texans, who may have had the worst secondary in all of football last season, but still decline to add a top cornerback to their organisation. If Dallas passing on Prince was surprising, Houston passing on him is just almost incomprehensible.
I'm not sure if Amukamara pissed on Jerry Jones's yard or knocked his daughter up or what, but he certainly lost quite a bit of money yesterday when two teams, both with huge gaping holes in their secondaries, chose to let the second-best corner in the draft slide right on by.
Axe Hair Products -- Look, I love Sam Bradford. I really do. He was outstanding as a rookie, and I think the sky really is the limit for him in the future. Still, if I'm the Axe company today I'm kicking myself for signing Bradford up to an endorsement deal for my hair products when I could have just waited a year and gotten Blaine Gabbert.
I mean, honestly, did you see that guy's hair? The dudes on the front covers of romance novels envy Gabbert's mane. I don't know, maybe Axe can bring Blaine on board too, and they can have some sort of showdown between the former Big XII rivals. Sam's buzzcut isn't bad, but I'm sorry. He doesn't stand a chance if that showdown actually comes to pass. Blaine Gabbert has the hair of a god. It's sad he has to take it to one of the worst places on Earth. (Sorry, Jacksonville, but I once spent an incredibly miserable week there. The city covers literally thousands of miles worth of swampland and seems to be composed almost entirely of failed carwashes.)
Then again, if there's anything with enough magic in this world to transform Jacksonville into a bustling, metropolitan, culturally relevant paradise, it might be Blaine Gabbert's hair. I'm betting after just a year or two of having Blaine's hair in town Jacksonville will come to be known as the Prague of the Southeast.
And finally, a bonus loser...
Roger Goodell -- To be quite honest, the best moment of the entire night may have been Goodell, in all his smug glory, taking the stage and being roundly booed by the gathered throng, then forced to endure the chants of, "WE WANT FOOTBALL," as he tried to quiet the crowd by telling them he agreed with them. It was squirm-inducing television at its very finest, witnessing the fans have their say on the most public stage imaginable, while the man who represents the NFL stood helplessly by, looking for all the world like he would prefer to be literally anywhere else in the world at that moment.