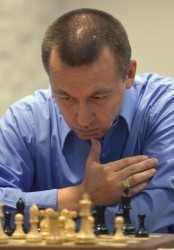 Today, right here in St. Louis, the 2011 U.S. Chess Champion and the Women's Chess Champion won titles, money and acclaim. Folks battled it out at the Chess Club and Scholastic Center of St. Louis.

Grandmaster Gata Kamsky took the overall title. The 36-year-old from New York is currently ranked No. 2 in this country and No. 16 on the planet. It's the second year he's won the overall title, and both years he's ultimately bested Grandmaster Yury Shulman from Chicago. Shulman's ranked fifth in the nation. Kamsky takes home a $40,000 purse. Not too shabby for a board game!

International Master Anna Zatonskih, 32, has won the title of U.S. Women's Champion three times and made it a fourth today. She beat out the incumbent champ, International Master Irina Krush, in a series of fast tie-breaking matches. Her prize is $18,000.

Congrats to everyone. Check out the chess club's site for more photos and detailed breakdowns of the matches.

We're left wondering: Do you have to have an utterly cool comic-book hero name to be good at chess?