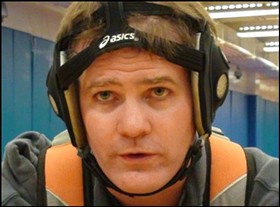 Greg Warren of Kirkwood is amassing an army. A comedy army. Of comedians. And they're assaulting The Funnybone tonight and Brennan's Wine Food & Tobacco Friday and Saturday. What plan has he hatched, this Westpoint-cadet-turned-nationally-touring-comic?

Daily RFT: So you've got a bunch of serious headliners and writers flying in...

Greg Warren: When I did my second CD ["One Star Wonder"] out in LA, me and some of my buddies goofed around for three days and did audio sketches. I put the sketches in between the stand-up bits. The CD got decent airplay on XM radio, but they played the sketches a lot. I wasn't expecting that. We just did 'em for fun.

So now I've got twelve guys coming, plus some local guys, and we're going to record some more sketches -- maybe to pitch as a radio sketch show, maybe to have someone animate it and see what that looks like. And I thought, as long as we're in town, we should do some shows.
Who's on the bill?

Auggie Smith and my buddy Henry Phillips have been on Comedy Central, Isaac Witty's been on Letterman.  Mark Gross, Chad Daniels, Jamie Lissow -- they've all been on The Tonight Show. So has [St. Louis native] Nikki Glaser; she's coming back in town. Then the local guys: Matt Conty, Josh Arnold, Joe Murray. And some others too.

If you're somebody who says, "I wanna be in stand-up comedy," I would say St. Louis is one of top five places to start. New York and Los Angeles have the most standups, but you're gonna get lost in the shuffle. Sometimes it's better to start where industry doesn't see you at first.

The lifeblood of the local comedy scene is the open-mic night, and Funny Bone [in Westport] has had a great one for 25 years. And part of what makes it great is that Matt Behrens is there every Tuesday night -- he's the one that does the booking for Funny Bone. That's unheard of, to have the guy who does the booking at an open-mic. But he's there, and he's actively part of comedy community.

Then you have Matt Conty's room at Brennan's, one Wednesday a month. It's a different part of the city [the Central West End]. When I'm in town, I love going up there and working on new material.

Really? Brennan's can be a really tough room, seems like. But it's also very intimate, and I've seen people really kill.

As you get farther along, you care less about outcome of one show. There's gonna be some that are better than others. For me, half the time, it's just, "Can I get these words out of my mouth and not sound ridiculous?"

Not many nationally touring comics live in St. Louis -- do you feel like you're missing out, not being on the coasts?

LA is great, and and I may live there again someday. But out there, I was always around people from the business. You end up writing about the business and it becomes insular. But when I'm home, I hang out with parents, my girlfriend, my brothers. I'm in Kirkwood, and I also remember those twenty years living here, and all those memories float in.

Living in St. Louis has been really good for my act. My writing got way better when I moved back.

You recently performed on Craig Ferguson -- how did you feel about it?

To be honest, I hadn't been pleased with what I'd done in television. But this last Ferguson, I feel like I really started to get it. I've finally found my persona.

I started talking about being 40 and not married yet, and somehow while I talked about it, I developed a persona that's very close to who I am, and that persona works onstage. Before, I was all over the place.

Also, on TV there's a certain rhythm you need to have. Especially for late-night shows, you only get a five-minute set on Ferguson. But some of my best stuff was long. It's just a learning process.

People would tell me that I won't hit my prime for ten years, and I thought, "Shit, I'll be retired by then, selling shoes at West County Mall." But now, I'm starting to really like this stuff.