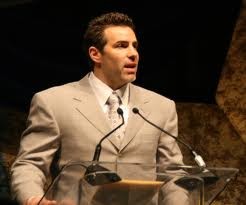 We spent an intriguing day yesterday at Scottrade Center Getting Motivated! with Laura Bush, Colin Powell and other assorted aging luminaries -- and believe us when we say we'll have far more about that once we get our notes together. (This was, of course, that much-hyped all-day motivational seminar where tickets cost just $1.95 each -- $9.95 for your entire freakin' office! And yes, our ticket really did cost $1.95.)

At Scottrade, we heard plenty of interesting anecdotes, including the fact that Laura Bush was about to head to the Bridgeton Trails Library for a ribbon-cutting at a new teen center named after her. As library junkies, we thought that was a pretty cool honor for this former librarian -- and in the wake of the tornado-caused devastation in that suburb, we're sure her visit couldn't come at a more appreciated time.

But we also learned one bizarre thing about retired NFL superstar Kurt Warner: He seems to be doing his best to give his young daughter an eating disorder.

The charismatic Warner, one of the featured speakers at yesterday's event, gave an inspiring speech that stressed such sports' tropes as perfection, vision and perseverance. But we couldn't help but be alternately amused and horrified by an anecdote he included to illustrate one point about his five-year-old daughter, Sienna.

Warner went on to relate that he had seven kids, and so sometimes while the kids are in the pool, he or his wife will count heads to make sure everyone is accounted for. But if they get to six bobbing heads, he said, they know they're OK.

In fact, one day, Warner claims he had some rustling noises in the pantry, followed by a thud. He came in to find the little girl flat on her back.

Warner was using the anecdote to praise his daughter's perseverance. ("It's everything I can do to not smile and go, 'Yes!'" he told the audience. "I got one that's willing to sacrifice anything. I know it's Oreos, but it's a start!")

Still, we couldn't help but chafe a bit at the idea of calling a little girl "Chubby" to her face. Even Warner seemed to know he was treading a very fine line: "I know, I know. I'm going to give her a complex."

He concluded, "I won't show her this tape."

Call us crazy, but we suspect having your handsome athletic father call you "Chubby" to your face could be equally damaging -- even if you are five years old. Did you know one in five pre-teens are already dieting? Or that dieting at a young age is a huge predictor of being overweight later in life?

Suffice it to say, we're a lot less worried about this kid grabbing the Oreos, and a lot more worried about her all-too-public nickname. It wasn't exactly the Motivation! we came for, but we still couldn't get the moment out of our head.