Watch Out! Black Bears Are Back 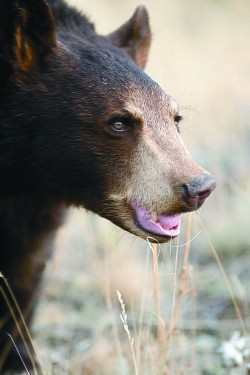 We've told you all about the return of prairie chickens, elk and hummingbirds to Missouri, but have you heard that black bears are coming back, too?

Yep, it's true. Biologists at the Missouri Department of Conservation now admit they may have been a little hasty when they declared the black bear was extirpated from the state back in the 1950s.

Recently biologists have discovered that the bears have been hiding out in the woods in the southern portion of the state. They've been breeding and some are now, apparently, genetically separate from their ancestors. Others have wandered north from Arkansas, which implemented a bear restoration program in the 1960s.

Instead of cowering in fear like most people would, though, the MDC has embraced these bear sightings as an opportunity for learning. Because it's not enough to know that bears are here. They want to know about things like movement patterns, population densities, habitat preferences, male-to-female ratios and overall numbers of Missouri bears.

Starting next month, MDC researchers will start trapping bears in hair snares and barrel traps to take their vital statistics.

"We will use pastries to lure bears into traps, which we will monitor daily," biologist Scott McWilliams said in a press release. "We will arrive quickly after a bear enters the trap. Once our measurements are complete, we'll monitor each bear from a distance to ensure it exits safely."

McWilliams noted that the bears will be tranquilized before any measuring is done. They will also be fitted with radio collars so the biologist can monitor their whereabouts in the future.

Though most bears have been spotted in the Ozarks, there have been sightings in St. Louis and St. Charles counties as recently as last year. If you do see a bear, report it to the MDC by using this handy web form or calling 573-290-5730.