ShootPaul: Go Ahead, You Know You Want To 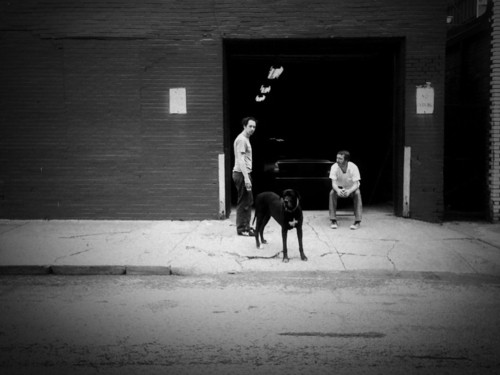 About six months ago, Jake Houvenagle and his friend Paul Jackson came up with a stupid drunken idea: They would build a Web site that would allow users to virtually shoot at Paul with a paintball gun, sort of like a live-action video game.

Unlike many stupid drunken ideas, this one is actually going to come to fruition. As you read this, Houvenagle, 29, and Jackson, 28, are assembling their shooting gallery in a warehouse in downtown St. Louis. (Houvenagle will reveal only that it's near the corner of Tucker Avenue and Washington Boulevard.) Soon they will start testing. If all goes well, the site, called ShootPaul.com, will go live at the end of May.

So why are they doing this?

"As we get closer to launch, I ask myself that question all the time," Houvenagle admits.

This will actually be the second incarnation of ShootPaul.com. "Paul launched it in 2009," Houvenagle explains. "It lasted only three weeks. He got tired of being shot at."

It's understandable: a paintball pellet travels at 200 miles per hour, which could sting a little.

This time, Houvenagle vows, will be different. For one thing, Jackson won't be available for shooting 24/7. "Someone will be in the room from about 8 a.m. till 10 p.m.," Houvenagle says. "We'll have some break time, some recovery time." Houvenagle and Jackson will share target duties: Houvenagle nights and weekends (he has a full-time job) and Jackson during the day. They hope to invite a few more targets, called minions, to participate.

"The minions will mostly be our friends hanging out," says Houvenagle. "We'll have a lounge area with free drinks and entertainment. We hope that they'll start jumping in."

Everyone will have to wear face protection. Body armor will be optional.

The 54-foot-wide shooting area itself will be propped out to look like a living room, with a couch and toys, like a swing, a bicycle and roller skates. Visitors will take aim using their keyboards to move the target, which will show up as crosshairs on the screen. The website will have an audio link to Paul's cell phone so visitors can call and ask him to do things; they can also communicate through Skype and live chat.

In 2007, Wafaa Bilal, an Iraqi-born artist, did a similar project in Chicago called Domestic Tension. Bilal, however, confined himself to a tiny room in an art gallery and was trying to make a point out about how the Iraq War was largely a virtual experience for Americans but a very real one for Iraqis. He was shot at by 62,000 people, most of whom failed to grasp the subtleties of the project; hackers eventually figured out how to make the gun fire constantly, and visitors to the website heaped verbal abuse upon him.

"I learned all these new things about myself," Bilal told the website Alternet. "I learned I was a nigger, and a sand nigger. That I was gay. Part of it is demonization, then you can justify trying to shoot me." The project took a physical toll on Bilal: ear and chest pain, sleep deprivation and general stress from being shot at. (The following year, Bilal published a book, Shoot an Iraqi: Art, Life and Resistance Under the Gun, about the project and the experiences that inspired it.)

ShootPaul.com does not have such lofty goals. "[Domestic Tension] might have been inspirational to Paul," Houvenagle admits, "but we're not looking to make a statement. It's more like, 'Hey, check out this cool thing, look at what we can do!'"

Daily RFT has a call into Bilal to see what he thinks about what his art has inspired. We'll keep you updated.