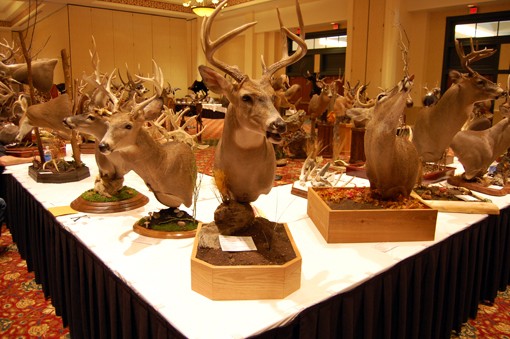 Once again the St. Charles Convention Center will be hosting the World Taxidermy and Fish Carving Championships. True to its name, the competition is the world's largest: Organizers expect 1,000 taxidermists and fish-carvers from 47 states, plus 20 foreign countries, to descend upon St. Charles on Tuesday, May 3, to show off their stuffed prey and wooden fish and compete for $3,000 in cash prizes. (Taxidermy is more lucrative if you actually sell what you stuff.)

"Anyone who views this competition will be amazed at how realistic these compositions are," said Larry Blomquist, show promoter and publisher of sponsor Breakthrough Magazine. "People are always truly impressed with the careful attention to detail that these taxidermists have when creating and exhibiting these artistic pieces. Some past winning pieces have sold for tens of thousands of dollars." (See?)

"We're coming back to St. Charles because of the quality of the facilities," Blomquist tells Daily RFT. "It enables us to put everything in one venue. The St. Louis metro area is centrally-located. Most people drive because they bring large-mount entries, and 75 percent are within a day's drive."

Blomquist doesn't anticipate the entries in this year's competition to vary greatly from those from 2009. "White-tail deer are the most popular," he says. "They're one of the most popular game animals to hunt. We see a lot of bird-work, waterfowl. Some people bring hummingbirds, which are extremely difficult to do."

One type of taxidermy that will not be on display is anthropomorphic, or novelty, taxidermy. (For more, see the 2009 Riverfront Times feature "Mount My Squirrel!") "I personally don't believe in it," Blomquist says. "I don't believe in misusing nature."

He does, however, support re-creations of extinct and highly-protected species. The 2009 Best in Show winner was a simulation of a lowland gorilla, made with artificial hair.

Blomquist recommends that visitors stop by for the public viewing on Friday night, May 6, and to allow at least an hour to take it all in.