Former RFT staffer Ben Westhoff is out with a new book exploring the artists who helped popularize the southern style of hip hop that has dominated airwaves for much of the past decade. Tonight at 7 p.m. Westhoff reads from his work Dirty South: Outkast, Lil Wayne, Soulja Boy, and the Southern Rappers Who Reinvented Hip-Hop at Left Bank Books (399 N. Euclid).

Last week we caught up with Westhoff -- now based in New Jersey -- as he was about to embark on a multi-state tour to promote the book.

Why hip hop? And why specifically a book about southern hip hop?

When I was in St. Louis doing some research, I dropped by the RFT and Tom Finkel (editor) took a little credit, and I'll let him take a little. At the RFT I got increasingly into writing about hip hop. It was such an exciting time in St. Louis for that type of music. And I've found that generally speaking, hip hop is really under-reported in traditional journalism. That's too bad because so many of these rappers have overcome some serious personal tragedies and some series odds. Southern hip hop is all the more intriguing because many of the more established rappers on the coasts have dismissed it as being superficial.

Your book includes a chapter on Nelly. He's not exactly a southern rapper, or is he? 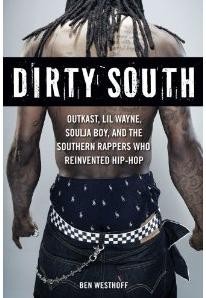 The influence of the southern style of hip hop known as crunk was pretty popular in St. Louis when I was there in the mid 2000s. And I'd say the St. Louis sound is definitely a southern sound. I included Nelly because he was such an influential player. A lot of people copied his style. Before him it wasn't that cool to have sing-song elements in rap. He had a very pop sound and took some heat for it -- like when he collaborated with NSYNC. People laughed at that at the time, and then Justin Timberlake went on to be huge. Generally speaking, southern rap -- unlike East Coast rap -- is the music you hear at the clubs. The stuff you can dance to, and Nelly definitely fits in that category.

You interviewed some of the St. Lunatics for your book, but you weren't able to secure an interview with Nelly. Was it hard to corral a lot of these stars for your book?

With Nelly think it was more at the end of the day he didn't have a new album to promote, so I think he didn't feel he had anything to say. The biggest problem, though, is that the two biggest stars were in jail most of the time I was working on the book. Fortunately I was still able to interview Lil Wayne. Another artist, Gucci Mane, seems to get out of jail and go right back in. Another artist, Lil Boosie, is potentially facing the death penalty in Angola prison in Louisana.

Was it difficult, too, in that you're a white guy from Minnesota?

What's one of your most memorable moments reporting the book?

Stalking Luke Campbell of 2 Live Crew comes to mind. He's the Godfather of southern rap -- doing it since the 1980s and I just had to get him for the book. But after getting him to agree to an interview, he stopped taking my calls. Later on I found through his manager that he was playing in Athens, Georgia. His manager told me what flight he was taking into Atlanta, and I was waiting at the baggage claim for him. Luke ended up letting me jump in his car on the ride to Athens where I interviewed him. Later that night he had me come on stage during his concert, which was less a concert and more of a competition to see how many women he could get to come on stage and take off their clothes. And there in the center is me.