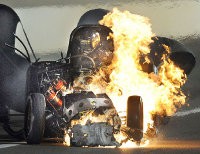 It seems like one disgruntled Missourian has reeeeally taken offense to Lt. Gov. Peter Kinder's recent use of taxpayer's money. Either that, or the politician simply drives the type of car that's attractive to thieves. Both scenarios seem to involve a free ride and a messy cleanup.

Kinder, you may recall, recently came under fire for using government money to subsidize his lavish stays at local hotels during his frequent trips to St. Louis. (He's since promised to pay back the money.)

Yesterday, the lieutenant governor's car, a 2009 Ford Flex, was reportedly stolen in Cape Girardeau and promptly rammed into a gun shop. The vandal then torched the car and left it burning on a county road.

We're not sure if the alleged thief, a 20-year-old who's been arrested and charged, had any appreciation for irony when he barreled into the gun store. Kinder is a supporter of the Second Amendment and received an award from the National Rifle Association in 2007 for his work to allow citizens to carry concealed weapons in public.

Kinder, who hails from Cape Girardeau and was in town for a naturalization ceremony, told the Southeast Missourian that the car was "burnt to cinder." He also said he shouldn't have left his keys inside.