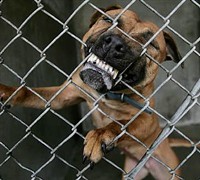 When a St. Louis girl was bit by a dog, she and her family filed suit against the dog's owner, alleging the attack was a result of the owner's "negligence and carelessness."

But the dog's owner, Linda D. Rich of St. Louis, thought the dog's behavior wasn't her fault. She filed suit against the Humane Society of Missouri -- alleging that the non-profit had breached its duty to her by failing to "determine the extent of the dog's dangerous nature and hazardous propensity to bite."

And in an opinion released today, the Missouri Court of Appeals Eastern District agreed with the circuit court that the Humane Society does not bear responsibility in this case. If you lie down with a dog, apparently, you can't blame the shelter for its fleas.

While we only know some of the details of the case (the appellate decision, for example, does not tell us how badly the girl, Marissa Miles, was injured, nor what happened to the dog), there are a few interesting points to ponder.

For one thing, Rich wasn't kidding about the whole "propensity to bite" thing. According to the lawsuit, Rich adopted the stray in March 2003 -- two months after it arrived at the Humane Society. Within a matter of weeks, Rich alleges, she informed the Humane Society that the dog had bitten a child.

But, she alleges, the non-profit encouraged her to "give the dog more time" instead of referring her to Animal Control. They also suggested she enroll the dog in its behavior modification class -- but did not explain its own policy of "not retaining" a dog who bites.

So then when, a year later the dog bit another child, fellow Shaw resident Marissa Miles, it's easy enough to see why Miles and her family thought Rich had been negligent. This bite was not an isolated incident.

But the court decided that was not the Humane Society fault, no matter what its advice to Rich. "Here, the Humane Society did not possess, harbor, or control the dog when it bit Ms. Miles," the judges write. "As a result, it had no duty under common negligence principles to prevent the harm to Ms. Miles."

Further, the court found, while Rich argued that the Humane Society "had assumed a duty to take steps to prevent injury to Ms. Miles by screening dogs it put up for adoption and preventing their release to the public," that is not the case.

"The question of whether a duty exists 'depends upon a calculus of policy considerations,'" the judges write. And in dog-bite cases, negligence generally comes into play when an owner fails to exercise control of the animal. It's a pretty big slide down a slippery slope to claim the Humane Society is responsible for a dog that it no longer possesses.

Interestingly, by the time this case reached the appellate level, Rich and Miles had already come to a settlement. The only question remaining was whether the Humane Society should also be on the hook. With that settled, this lawsuit appears to be dead.