When You've Got Elk Shit, Why Not Make Jewelry? 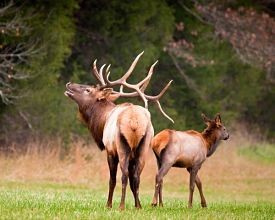 Folks in southeast Missouri hope that the elk that are coming to live at the Peck Ranch Conservation Area next weekend will prove to be a huge tourist draw, providing a reason for city slickers to trek down to the Ozarks between river-tubing and hunting seasons.

In anticipation of this joyous event, the town of Eminence has already declared itself the Elk Capital of Missouri and other neighboring towns are planning a full-blown Elk Festival around the time the elk start bugling in late September.

But, after touring the area, Daily RFT has concluded that the Ozarkians need to think bigger. Experiencing the majestic elk in their natural habitat, even hearing the bugle call bulls use to summon the cows in their harem for some hot and heavy elk sexytime, is not enough. Tourists must have a tangible memory of their visit, to prove they were really there. And a simple T-shirt won't cut it.

They need to take a cue from the crafty women at the Beckham Combs Community Center in the small town of Vest in the heart of Kentucky elk country who take wonderful advantage of natural resources provided by the elk and have gone into business making elk pellet jewelry.

Yep, that's bracelets and necklaces made from elk shit. 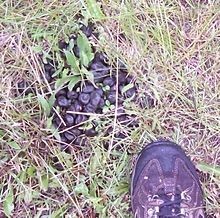 Sadly, no one was available to take our call when we rang up Beckham Combs to ask what had inspired them to craft earrings, bracelets, necklaces, bookmarks and hatbands from elk shit, which they sell for $5-$15. But based on photos, the poo does seem to have design potential.

Considering the size of elk, their pellets are surprisingly dainty, only about an inch long, and they're round-ish. It's quite possible someone would look at them and think, "Beads!"

According to an article on the website Bluegrass Mom, the elk pellets are "a gift so determinedly planted there for the picking and the plundering by 11,000 unpaid laborers that it would be wrong to ignore it."

"At first it was fresh and wet," McBride said, making a face of minor disgust. Mind you, she is talking while she is fashioning the finished product pellets into earrings that she will soon cheerfully don for a photograph.

"The trick is not looking very close," said McBride, now a poo-picking professional. "Once it's dried for a few weeks and sprayed with polyurethane, it's just like anything else. "It's just a state of mind."