The Rise of Mitchell Boggs 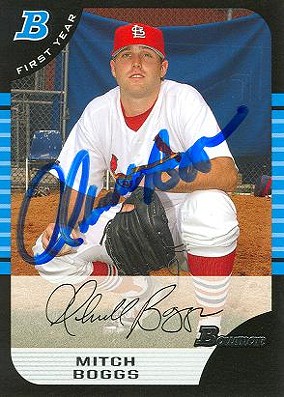 The bullpen has been a serious concern for the Cardinals in the early going, with a closer who can't seem to close a game leading the list of worries. They're down to just one lefty, never a good thing on a Tony La Russa-led team, Jason Motte has looked shaky in the early going (though, to be fair, he always looks shaky to start out the season), and the guy brought in to serve as starter insurance or to absorb some longman innings is currently option No. 1 to get setup work.
On the other hand, there have been a couple encouraging signs as well. Trever Miller has looked great again, the Andre Ethier double notwithstanding. Eduardo Sanchez has come to the big leagues looking for all the world like Francisco Rodriguez circa 2002. And, just as significantly, it's looking more and more as if Mitchell Boggs just might be taking a big step forward in becoming the guy we all hoped he could be out of the 'pen.
Boggs has always had the stuff, with a fastball that sits easily in the mid-90s and an off-the-table slider when he's going right. As a starter his heater lost a couple ticks and turned into a good but not great pitch; out of the bullpen he presents the ability to simply overpower hitters.
Despite the pyrotechnic stuff, Boggs has never had quite the kind of dominant success you would expect at the big league level, simply because the command of his arsenal has always lagged behind its quality. He improved his walk rate in 2010, dropping from a 5.1 BB/9 in 2009 (admittedly, more than half his appearances that season were as a starter, skewing the results somewhat), down to a much more palatable 3.6. Even so, his 7.0 strikeouts per nine was oddly unimpressive for a pitcher with his stuff, largely because he lacked the ability to put the ball where he wanted to.
So far this season, though, Boggs has been almost untouchable at times. In 9.0 innings he's struck out 12, walked only 3, and given up just 3 hits for a WHIP of 0.67. Now, do I expect him to continue striking out twelve batters per nine innings for the rest of the season? No. Even so, he's looked like a different pitcher, and I do think that might continue.
The biggest difference I've seen from Boggs this season compared to the past is his command of the slider. It's always been a pitch with outstanding movement, but rarely before did it seem interested in going where Mitchell was actually trying to throw it. In 2011, though, Boggs has broken off several sliders and put them in perfect locations. Anecdotally, it also seems to me Boggs has backed off his velocity ever so slightly with his fastball. In the past, he would put up the occasional 97, throwing neck-and-neck with Jason Motte. So far this year, though, he seems to be sitting more at 93 or 94, with a 95 thrown in here and there.
I haven't actually researched enough through the game logs to know if my impression is correct or not, to be honest. It's possible Boggs is throwing just as hard this season, but I don't think so. It looks to me like this could be a case of a pitcher realising he's rarely at his best throwing at his absolute maximum and sacrificing just a bit of velocity in order to control the ball better.
Regardless of how exactly he's doing it, Mitchell Boggs has been one of the really pleasant surprises so far in 2011. I've had my doubts about his ability to ever harness his repertoire properly in the past, and to be honest I still do. A nine inning hot streak early in the season is certainly possible, and he could easily go right back to the same inconsistent pitcher we've come to know and love any day now. Still, he's looked better in this nine inning stretch than I can ever recall him looking at any other point in his major league career. I'm not ready to buy in completely on Boggs just yet, but my skepticism is getting harder to maintain all the time.
At the very least, we should all hope Boggs's early-season performance is more than an illusion. If the Cards are going to have any hopes of staying in contention they'll need all the relief help they can get.