PHOTO: You'll Never Guess What Else Jay Nixon Bagged Yesterday (It's Not a Turkey) 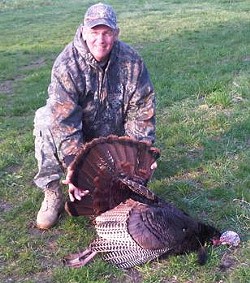 Yesterday was a busy day for Missouri Governor Jay Nixon.

Not only did he broker what he called a "Missouri Solution" to the ongoing debate over puppy mills, he also bagged a 23-pound gobbler on the opening day of spring turkey season.

This morning, the governor's Website posted the photo (to the right) of Nixon with the turkey, shot in Pulaski County.

Of course, such photos are not uncommon for politicians -- especially those of the Democratic ilk -- who like to show constituents that they're A) gun-friendly B) willing and able to appear in a Busch beer commercial if asked.

But another photo of Nixon taken yesterday shocked even our jaded eyes at Daily RFT.

We hear the photo was intended to appease dog breeders who thought the governor had given in too much to those bitchy animal-rights activists with his "Missouri Solution" -- even though said "solution" eliminated most provisions of the voter-approved Puppy Mill Cruelty Prevention Act.