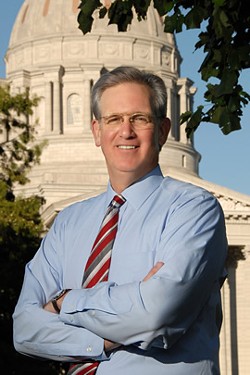 Yesterday Governor Jay Nixon announced that he'd brokered a "Missouri Solution" to the fight over the state's notorious puppy mills.

Working with animal rights activists and commercial dog breeders, the governor forged a deal that would keep just a few provisions of Proposition B -- the ballot issue that 51.6 percent of Missourians passed in November, calling for greater restrictions on dog-breeding facilities.

Nixon's "solution" comes in response to efforts by the state legislature to overturn Prop. B. The governor's proposal requires that the dogs get larger cages -- a key point of contention between the two sides. Those cages, however, can still remain stacked on top of each other, allowing gravity and the canine digestive tract to wreak havoc on the pooches on the bottom row. (That howling you heard in the distance last night was thousands of dogs calling dibs on top bunk.)

The "solution" also calls for more access to exercise areas for the dogs and requires vets to physically examine each pooch annually instead of just "eyeballing" them as before.

Gone, though, are the measures limiting the size of a dog farm to 50 breeding animals. So too is regulations on the breeding frequency for the dogs.

The governor touted that his solution also would set aside $1.1 million to pay for additional inspectors and veterinarians to inspect the dogs. But that money requires approval from the Republican-controlled legislature (a.k.a. the same people who lined up en masse to kill Proposition B).

Not having HSUS's blessing could prove key. The national organization provided the majority of the funding to place Proposition B on the ballot last November. Just last week, animal rights activists stated that they could attempt another ballot initiative should Nixon sign the bill overturning the will of the voters.

Yesterday the president of HSUS stated that Nixon's solution "falls short of Proposition B."

Nixon could have flexed his political muscles by vetoing outright the bill to strip Proposition B. Instead, he turned his back on urban voters (who predominately voted in favor of Prop. B) with his watered-down solution aimed at appeasing farmers worried that dog-breeding laws could eventually affect how they raise their cows, pigs and other livestock.

"The agreement that was signed today upholds the intent of the voters, protects dogs and ensures that Missouri agriculture will continue to grow," said Nixon yesterday in a statement.

Sorry, governor, but who the hell considers dogs to be agriculture?

Corrections: This article initially stated that Proposition B would make certain violations a felony. That's incorrect. It would have made any violations a Class C misdemeanor. Nixon's compromise, by comparison, would only make repeat violators subject to a Class C misdemeanor. This article also originally referred to the Humane Society of Missouri as a "chapter" of the HSUS. The two organizations are, in fact, separate from one another.