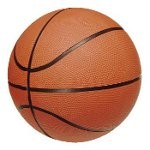 Who knew St. Louis had a semi-pro women's hoops team coming to town?

As the St. Louis American reports, the St. Louis Surge are the newest members of the Women's Blue Chip Basketball League, home to several international hoopsters and ex-WNBAers, as well as many college players looking to be recruited. According to the league's website, one out of 40 players from the WBCBL turn pro ... so it's possible you could say one day that you saw her here first.

The team kicks off its preseason this Saturday with a round-robin tourney against the Kansas Nuggets and Rock County (Wisconsin) Robbins at Vashon High School, where all home games will be played. The official season begins next month. Tickets are $5, with season passes retailing for $20.

According to the American, the Surge boasts several former area standouts, including Chanel Ross and Vashon alumna Laniya "Star" Stevens, who each helped lead Harris-Stowe State University to the NAIA tournament team a few years ago. Twins Veronica and Victoria Smith, former stars for East St. Louis High, are also on the squad.