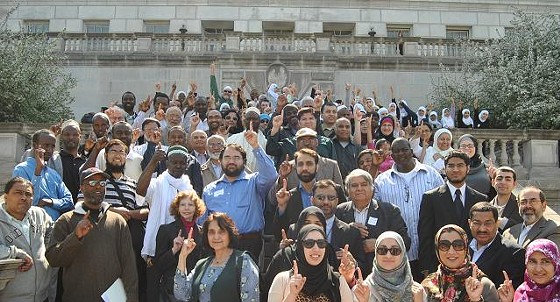 Jim Hacking of the St. Louis chapter of the Council on American Islamic Relations (CAIR) sent Daily RFT the photo above. Would you look at all those frightening people! Thank God (the Christian one!) we have Missouri legislators willing to protect us from these folks.

Yes, contrary to what we originally published (below), state lawmakers have actually filed three pieces of legislation -- not one -- aimed at preventing Missouri courts from considering Sharia law when rendering decisions. Sharia (a.k.a. Islamic Law) could come into play in rulings considering child custody or prisoner rights for Muslims.

One proposal (HJR31), sponsored by state rep Don Wells (R-Cabool), would amend the state constitution to include language specifically prohibiting courts from considering Sharia law. The other two bills, sponsored by Republican Brian Nieves in the Senate and Republican Paul Curtman in the House, are a bit more innocuous. They don't specifically mention Sharia, though their intent is the same. Their proposals simply state that Missouri courts can't consider foreign or international laws. (As Mother Jones recently reported, legislators in other states have turned to similarly vague bills after a federal court slapped an injunction on a voter-approved amendment in Oklahoma prohibiting courts from considering Islamic law.)

Hacking tells Daily RFT that the visit to the capitol on Wednesday was productive, with members from two mosques in St. Louis and Muslims from across the state getting the opportunity to meet their legislators. Still, he imagines the anti-Sharia movement to continue to move forward for the immediate future.

Several followers of Islam are expected in Jefferson City today to oppose a proposed bill that would prohibit Missouri courts from recognizing certain international laws and rulings.

As KMOX explains today, the Missouri bill is similar to legislation in thirteen other states intended to ward off the influence of Sharia, a.k.a. "Islamic Law." The issue became a national talking point in conservative circles after a Florida judge agreed that litigants could settle a matter under the ecclesiastic law of the Sharia.

No where in Paul Curtman's (R - Pacific) bill (HB 708) is Islam, Sharia or the word "religion" even mentioned. Instead, the bill vaguely states that Missouri would not recognize any rulings from an outside court or tribunal that does not grant the same fundamental rights as those recognized in Missouri and the U.S. Constitution.

Seems like a no-brainer. But is the law even necessary? Jim Hacking, of the St. Louis office of the Council on American Islamic Relations, says no.

"The First Amendment would already prohibit any use of Sharia Law or imposition of Sharia Law on any citizen of the United States and Missouri," he tells KMOX.