Why Not Sell the Naming Rights to the New Mississippi River Bridge? 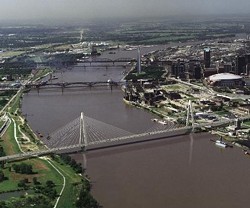 Yesterday the Missouri Senate killed a bill that would have named the bridge under construction in north St. Louis after two local politicians and -- almost as an afterthought -- everyone who ever served in the U.S. military.

That's right. Gone is the proposal that would have called the structure the "Jerry F. Costello-William 'Bill' Clay Sr. Veterans Memorial Bridge." How's that for a mouthful?

Can you imagine the guy in the traffic copter telling radio listeners: "Traffic is really beginning to back up on the Jerry F. Costello-William 'Bill' Clay Sr. Veterans Memorial Bridge?" Criminy! He'd have to break for a commercial halfway through the damn name.

Speaking of commercials, here's an idea: Why not commercialize the bridge by selling its naming rights?

The bridge is costing taxpayers $667 million to build. In case you haven't heard, Missouri, Illinois and the federal government are all damn near broke. So why not sell off the naming rights to the highest bidder? It's not that uncommon. Seriously. Last year Philadelphia sold the name of one of its subway stations to AT&T for $1 million a year.

Certainly a bridge spanning the Mississippi could get at least that much, no? How about it, Missouri legislators? Because, really, no one but yourselves gives a rat's ass what the bridge is called. All the better if the name could help recoup some of the costs.