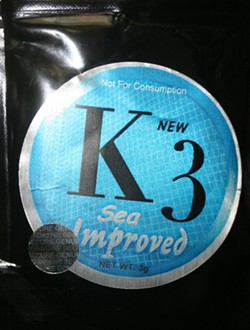 St. Charles County last night became one more region of Missouri that won't wait for Jefferson City to pass a statewide ban on the sale of new forms of synthetic cocaine and marijuana.

By a unanimous vote yesterday, council members voted to prohibit the sale in St. Charles County of fake cocaine (often marketed as "bath salts") and new types of fake marijuana. Thirteen months ago the county became one of the first places in the state to ban the sale of the fake marijuana known as K2. Since then new variations of the synthetic pot have made their way onto the market that are technically legal to sell.

The ordinance takes place immediately. Shop owners have 30 days to comply with the law before facing the possibility of prosecution.