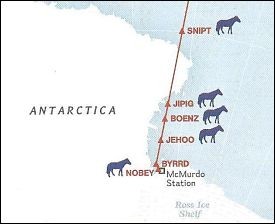 Now the project has been written up in National Geographic, which reports,

Aviation historian Roger Connor says coordinates are often named for local history and as inside jokes. But few earn the approval of scientific bodies and air authorities alike; fewer still are honored by the U.S. secretary of state, as happened last fall.

While none of Scott's ponies advanced very far into the Antarctic interior -- they couldn't handle the ice and snow and had to be shot -- seventeen of Amundsen's dogs made it to the South Pole on December 11, 1911.

Sadly, Antarctica today is a no-dog zone because of distemper risks.

Riverfront Times profiled Smith, who is also a poet, in the January, 2010, article "Poetry in a Cold Climate".