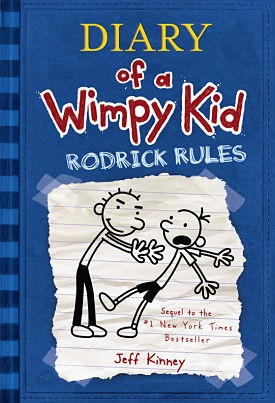 Henrietta Lacks' reign on the adult best-seller list has finally ended. She's been displaced by The Outside Boy, Jeanine Cummins' first novel about a Traveler (that is, gypsy) boy in 1959 Ireland. But don't worry -- Rebecca Skloot's bestseller about an African-American woman who inadvertently donated her "immortal" cancer cells to science has only slipped to No. 2. The Pale King, David Foster Wallace's unfinished final novel, also did well, even though it wasn't scheduled to come out 'til April 15, Tax Day.

Over on the children's and young adult list, it was a good week for sequels. Rodrick Rules, the second installment Jeff Kinney's Diary of a Wimpy Kid series took the top spot, and St. Louis readers also picked up the further adventures of Katniss Everdeen (Suzanne Collins' Catching Fire), Curious George and Fudge Hatcher, the most obnoxious and embarrassing younger sibling of all time. (Come on, people, he ate his brother Peter's pet turtle!)

1. The Outside Boy by Jeanine Cummins 2. The Immortal Life of Henrietta Lacks by Rebecca Skloot 3. Heaven Is For Real by Todd Burpo 4. The Pale King by David Foster Wallace 5. I Was a Dancer by Jacques D'Amboise 6. A Visit From the Goon Squad by Jennifer Egan 7. In Fifty Years We'll All Be Chicks by Adam Carolla 8. A Game of Thrones by George R. R. Martin 9. Great Heart of the Republic: St Louis and the Cultural Civil War by Adam Arenson 10. The Land of Painted Caves by Jean Auel