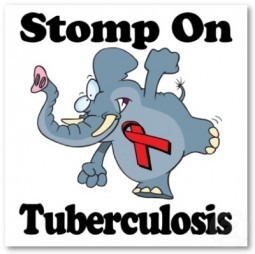 The St. Louis Zoo's 40-year-old Asian elephant, Donna, is being treated for tuberculosis. Dr. Randy Junge, director of animal health at the zoo, told the Post-Dispatch that the staff is hopeful Donna will make a full recovery.

She's being treated with antibiotics and isn't showing any symptoms. Zoo officials haven't isolated her from the rest of the herd, but the other elephants are being closely monitored for signs of infection.

She was diagnosed during a routine screening. Tuberculosis is detected in elephants using a trunk wash, which gets a testable culture from the inside of the prehensile proboscis.

The lung disease is not uncommon in captive elephants, according to Elephant Care International. Their fact sheet says about thirteen percent of the elephants they've studied have the disease -- enough to trigger a mass panic if it were humans.

Casual contact between elephants and people -- like, say, gawking in the zoo -- is extremely unlikely to result in human infection, but people who work closely with the animals can be at risk, according to the fact sheet.

In a closed system like the zoo, though, treatment has a good chance of success. Typically, antibiotic treatment lasts a year, and infected animals stop shedding contagious materials after a few weeks of treatment.