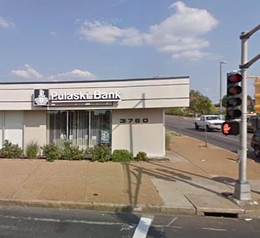 Did you hear about yesterday's wild bank robbery? St. Louis police report that the two suspects were released from the hospital this morning. Charges could come any moment now.

In the meantime, here's the lowdown as reported by the St. Louis police:

After receiving cash, the suspects fled the bank. No one inside the bank was injured. Moments later police spotted a pick-up truck with the suspects inside and attempted to pull the vehicle over. The vehicle fled at a high rate of speed. As officers continued to follow the vehicle, the suspects fired multiple shots at the officers in pursuit. Officers swerved repeatedly in an effort to avoid the oncoming gunfire. The suspects continued to flee and at Marcus and Lexington hit an oncoming vehicle which caused a chain-reaction crash with the two police vehicles that were in pursuit. The suspects then opened fire on police and officers returned fire resulting in both suspects and one officer wounded.

Suspect No. 1 is a 57-year old black male. He was shot twice in the head and once each in the wrist and ankle. He was transported to an area hospital and as of this writing he is listed in serious condition.

Suspect No. 2 is a 49-year old black male. He was shot in the hand, buttocks, and ankle. He also suffered a graze wound to the ear. He was transported to an area hospital and as of this writing he is listed in fair condition.

One police officer, a 42-year old male with twelve years on the force was grazed in the leg by bullet fragments. He was transported to Barnes Hospital where he was treated and released.

The department's Bomb & Arson Squad was called to the scene at Lexington and Marcus as a precaution because witnesses at the bank reported seeing a hand grenade. Bomb & Arson investigators located a single device inside the suspect vehicle and detonated the device at the scene. Investigators are still working to determine to if the device was authentic. Two guns and cash were located inside the suspect's vehicle. Investigators are also working to determine if this bank robbery has any connection to the bank robbery that occurred at the Pulaski Bank at 10 Maryland Plaza on March 30.

While the suspects in both incidents were described as two black males wearing construction vests, it is believed that the suspects in the bank robbery on March 30 are younger in age.